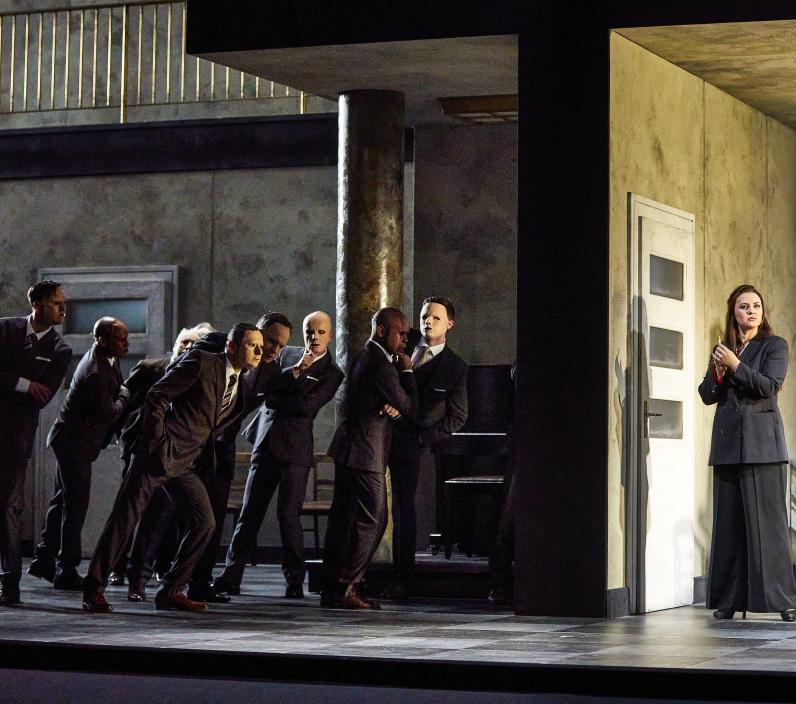 Lucia loves Edgardo, the last heir of her family’s enemy clan. They are in danger, but Lucia refuses to betray her love. A ring falls to the floor, the nightmare begins – the nocturnal sky fills with lightning and thunder, madness and blood reign, there is a corpse, then another and yet another.

Staatsoper Hamburg's Lucia di Lammermoor turns the city into a stage. Inspired by worldwide women's protests, director Amelie Niermeyer has filmed dancers in the city and invites them into the theatre via video. They rush to the aid of the main character Lucia, who - like the director - asserts herself as a woman in a man's world.

Lucia loves Edgard, the last heir of her family’s enemy clan. They are in danger, but Lucia refuses to betray her love. A ring falls to the floor, the nightmare begins – the nocturnal sky fills with lightning and thunder, madness and blood reign, there is a corpse, then another and yet another.
Staatsoper Hamburg's Lucia di Lammermoor turns the city into a stage. Inspired by worldwide women's protests, director Amelie Niermeyer has filmed dancers in the city and invites them into the theatre via video. They rush to the aid of the main character Lucia, who - like the director - asserts herself as a woman in a man's world.

Are you curious about how an opera production comes together? Follow stage director Amélie Niermeyer as she meticulously stages Donizetti's Lucia di Lammermoor at Staatsoper Hamburg. Watch as choreographer Dustin Klein guides the dancers. Admire the voice of the experienced Lucia performer Venera Gimadieva. Listen to dramaturge Rainer Karlitschek reveal the emancipatory impetus behind this production and discover how conductor Giampaolo Bisanti conducts the chorus in the balconies. After this in-depth feature, this production will hold no more secrets for you.

The families of the Ashtons and the Ravenswoods have long been at enmity with each other. The hatred has carried over into the present generation. The dispute is ruinous for both families. Edgardo Ravenswood has lost the family estate to the Ashtons, but Enrico Ashton is also in desperate need of money and new influence. He sees in his sister's marriage to Arturo Bucklaw a chance to rehabilitate the family. But Lucia is not thinking of marriage; she is still in mourning over her mother's death. Even so, the rumour persists that Edgardo and Lucia are a couple. When Normanno tells Enrico about it, he reacts angrily because he sees his deal with Bucklaw in danger. But the rumour is true: Lucia and Edgardo have fallen in love. Unbeknownst to them, he had recently saved her from a bull when she was on her way to her mother's grave. Since then, the two have been meeting secretly. Because Edgardo has to leave the country for a while on business, he would like to talk things out with Enrico so that he can marry Lucia. Lucia believes the time is not right. Nevertheless, they both promise each other eternal fidelity before God and exchange rings as a pledge for this. In this way they hope to bridge the time of separation. Normanno, on the other hand, has intercepted their letters. But he and Enrico go one step further: they compose a letter from Edgardo to Lucia to prove his infidelity. They also get the priest Raimondo on their side: for the sake of the family's honour, he should dissuade Lucia from her love. Lucia is initially unwilling to give in to her brother's pressure. But the forged letter makes her doubt Edgardo. She gives up her resistance and agrees to marry Arturo. Raimondo wants to ease her conscience: Her vow of fidelity has no binding force either before the world or before God because it was made without the presence of the church. Nothing more stands in the way of the marriage. The marriage contract is to be concluded immediately; Arturo Bucklaw is already there. But just as Lucia and Arturo have signed the marriage contract, Edgardo, who has just returned, interrupts the ceremony and confronts Lucia. She has to confess that she has taken Arturo as her husband. Enraged, he throws his ring at her feet. Edgardo is just barely prevented from doing worse by being expelled from the house. When the wedding celebrations are at their peak, Raimondo interrupts the hustle and bustle. He reports how he heard screams coming from Lucia's room, went to her room and found Arturo dead, obviously murdered by Lucia. She seems confused and feels she has to explain herself to Edgardo. After her crime, she has fallen into madness. She breaks down in a fit of rage against Enrico in front of the wedding party. Edgardo has to admit to himself that he still loves Lucia despite everything. From afar he hears death bells. Raimondo tells him that the bells are for Lucia. She has just died. Edgardo then takes his own life.

Toxic for both genders

When women rise up

A glance at the score of Gaetano Donizetti's Lucia di Lammermoor reveals a situation that is as bitter as it is familiar: Lucia's rebellion against her forced marriage is wiped away by her brother Enrico with a purely monetary argument concerning family welfare. Lucia, on the other hand, lacks the means to effectively resist. To this day, the emancipatory act of women who defend themselves against the dominance of male structures is dismissed as if the demands mattered little, simply because power still lies comfortably in the hands of men - according to director Amélie Niermeyer.

What a horror story!

The plot comes across as conventional and typical for its time: a young woman is forced into a marriage for family reasons, renounces her own great love to do so, but the love triangle of husband, lover and her ends fatally for all three. At first, the role of the young woman seems to be that of the quietly suffering victim. So far, so typical, but once she is married this seemingly passive Lucia, whose disposition brings out all the characteristics historically ascribed to the female sex, no longer reacts as expected by the men, in this case her brother Enrico and Raimondo. On her wedding night, she empowers herself, refuses to have intercourse with the imposed husband Arturo and murders him. We do not see this scene on stage, but we do see how she confronts the wedding party, i.e. the public, covered in blood. She escapes condemnation by dying. When her lover Edgardo learns of her fate, he commits suicide.

What at first looks like a conventional intrigue leads to a provocation. The female protagonist no longer allows herself to be steered by her male adversaries, but starts to fight back. She chooses the most drastic of all possible reactions committing brutal murder. The audience is shocked. We feel pity for Lucia, who acts out of pure helplessness in an act of deepest despair. Lucia's madness is touching - and the combination of glass harmonica or flute and high female voice in the most filigree and adventurous coloratura during the mad scene takes one's breath away. But is murder justified, just because it happens in the heat of the moment and the audience feels empathy with the mistreated perpetrator? Lucia is the victim of structural violence and discrimination, she is degraded to an object. We understand her act. Do we also forgive her?

Taking women seriously as autonomous figures despite oppressive social conventions is Amélie Niermeyer's guiding principle. She asserted herself as artistic director first at the Freiburg Theatre, then at the Düsseldorf Schauspielhaus, in a man's world. But looking back, she thinks that many things have not yet changed in society. This has fundamentally changed her view of the works today. Socio-political questions interest her more than ever. But she knows that this is a tricky business in operas like Lucia di Lammermoor. Political commentaries that impose today's view on the world on Italian opera are often flat and merely moralistic. She explores the fragile but sensitive mood of the score. The affirmative power of the music is the nucleus of the staging and allows political questions to recede into the background for the moment. She takes the stories seriously and does not shatter their basic structure. Whereas new textual levels can be incorporated into plays, music doesn't tolerate such intrusions. But Amélie Niermeyer reinforces the male dominance inscribed in the play. For Corona's sake, the chorus is banished from the stage to the side boxes of the theatre. There are two dozen extras on stage - all men in masks, whom Lucia and her confidante Alisa must fend off alone.

Get up and go

At first, the opera seems to formulate a hope that is again typical of the 19th century. That Lucia and Edgardo fall in love with each other and start a life together despite the enmity of their families is the central motif in the first act. Again, it seems conventional, but it is by no means so. If one wanted to prove that love is stronger than seemingly archaic family ties, Lucia and Edgardo would simply have to leave. Both are incapable of taking that step. Edgardo succumbs to a flat intrigue, becomes the victim of male networks to which he naturally belongs and exposes Lucia for signing the marriage contract. As if it were all about his ego. He thirsts for revenge and only realises after Lucia's death how he too is entangled in archaic structures of behaviour. He turns the weapon against himself. At least for Edgardo, the conventions of fidelity and marriage, or even religion, seem to be dissolved in the mourning for Lucia. One could almost think that this insight in death is a promise for the future.