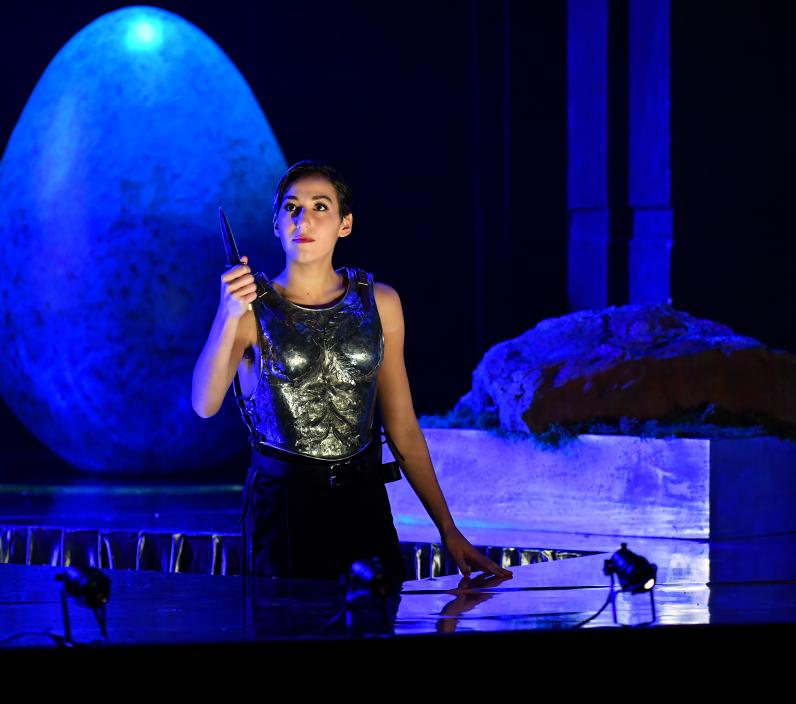 Mozart
This performance is no longer viewable as video-on-demand for rights reasons but other material about the production is still available.
Sung in
German
Subtitles in
English

Mozart’s last opera recounts the trials and tribulations of two opposing yet complementary young couples - Tamino and Pamina and Papageno and Papagena - who, in their search for love, journey through darkness to reach light and happiness.

Who doesn’t have memories of their time at school - a place of new discoveries, encounters with authority and perhaps the odd day dream at the back of the class? The Royal College of Music’s new production sets The Magic Flute in a secondary school and a dreamscape of hidden desires. As director Polly Graham explains below, this is the perfect backdrop for protagonists who are ‘on the cusp of sexual awakening, grappling with big intellectual ideas, and at a place in their lives where things happen for the first time, and where interactions with adults can be fraught.’ Michael Rosewell conducts a wealth of young talent on stage and in the pit - all not so long out of school themselves.

Papageno (Edward Jowle) can hardly believe his eyes when he is reunited with his perfect match, Papagena (Sofia Kirwan-Baez). The pair are overjoyed and look forward to making a family filled with little Papagenos and Papagenas.

The Royal College of Music’s new production sets The Magic Flute in a secondary school and a dreamscape of hidden desires. As director Polly Graham explains, this is the perfect backdrop for protagonists who are ‘on the cusp of sexual awakening, grappling with big intellectual ideas, and at a place in their lives where things happen for the first time, and where interactions with adults can be fraught.’ Michael Rosewell conducts a wealth of young talent on stage and in the pit - all not so long out of school themselves.

Behind the scenes of The Magic Flute

Welcome behind the scenes of The Magic Flute at Royal College of Music where director Polly Graham tells us about her take on Mozart's opera. She sets the action within a secondary school and a dream landscape - offering a retelling of gender relations. This interview features five young singers from both casts: Charlotte Bowden (Pamina), Sofia Kirwan-Baez (Papagena), Edward Jowle (Papageno), Ted Black (Prince Tamino) and Dafydd Jones (Monostatos).

In a secondary school, Pamina is receiving unwanted advances from her teacher, Sarastro. We follow her and her fellow pupils into an unconscious dreamscape.

Three women save Tamino and Monostatos from a deadly snake before seducing them. Tamino forms a friendship with Papageno. The women give Tamino a picture of Pamina, which immediately inspires his love.

Tamino’s love for Pamina is strengthened by the Queen herself, who sings of her outrage on Pamina’s behalf. The Queen lays down a challenge – if Tamino can save Pamina from Sarastro, he may win Pamina’s love.

The women present Papageno with magic bells and Tamino with a magic flute to assist them on their quest to find Pamina. They will be accompanied by three Junior School girls.

Papageno brings Pamina the news that Tamino loves her.

Tamino is led by the three juniors to the library, where he meets a teacher who defends Sarastro’s character, despite Tamino’s doubts. As Tamino tries to understand the truth, a group of animals appear to him, entranced by the music of the flute.

The power of this music is interrupted by messages from Papageno, and Tamino leaves to find him. Papageno and Pamina are discovered by Pamina’s on/off boyfriend Monostatos, but any conflict dissolves when Pamina gets out a spliff and Papageno remembers his magic bells. The teachers catch Monostatos smoking, and punish him.

Pamina challenges Sarastro and invokes the power of the Queen.

Tamino and Pamina are selected as house prefects and discover they have feelings for each other. The school assembly concludes with a hymn to the virtue of justice and good behaviour.

In class Tamino sends Pamina a note suggesting they go on a break. Sarastro dismisses the class and confiscates the letter. Teachers in the school advise all the male pupils that their first duty is to beware women, who will always lead a man astray. The male pupils agree an oath of silence.

The three women succeed in breaking Tamino and Papageno’s oath but are driven from the library by a gang of boys.

Pamina rejects a sincere advance from Monostatos. The Queen arrives and challenges Pamina to kill Sarastro. Sarastro and the teachers try to discipline the female pupils.

Papagena tells Papageno that she loves him. The three juniors advise Tamino and Papageno to persevere on their quest. Pamina tries to reconnect with Tamino but is met with silence which leads to despair. She is rescued by the three juniors who assure her of Tamino’s love, and lead her to find him.

The male pupils reinforce the game of silence but Tamino defies them and, following Pamina’s example, admits his love for her.

Papageno is searching for Papagena. His fear of not finding her again leads him to contemplate death, but he is saved by the three juniors who remind him that his bells are there to help him achieve his true wish.

Rejected by Pamina, Monostatos feels alone. Sarastro returns to assert a status quo over the pupils. The school assembly concludes with a hymn to enlightenment.

This production began with a conversation with conductor Michael Rosewell. How do we look at this piece with contemporary eyes and make it meaningful, relevant and alive?

By setting the action within a secondary school, we are able to access protagonists who are really young – on the cusp of sexual awakening, grappling with big intellectual ideas and at a place in their lives where things happen for the first time, and where interactions with adults can be fraught.

Inspired by an essay by the psychoanalyst Sabina Spielrein, we contrast the school space with a dream landscape where protagonists can explore their deepest desires and inner demons. Anyone who enters the garden of desire can do this. It is this magical landscape that offers a retelling of gender relations – from the chivalric ladies who rescue the vulnerable, terrified young men, to the incantatory force of the Queen of the Night, who appears to Pamina and encourages her to confront and then conquer her fear of her predatory teacher, Sarastro. The gifts of the magical bell and flute are ways for Papageno and Tamino to connect to their inner desires.

Pamina’s desire is complicated – she is not just interested in Tamino, but also Monostatos. Each boy offers a different kind of relationship. Monostatos is able to show everyone how he feels, to describe his desire and to ask for a kiss. By contrast, it takes Tamino until the Act II finale to actually have a conversation with Pamina!

The older teachers in the school are passing on and permitting misogynistic ideas to rip through the corridors. In the second half, the boys start a game where no one speaks to girls, leading to Pamina’s attempted suicide. When she finally dares to challenge the social pressures and be honest about her feelings for Tamino, the school world yields to the garden of desire, where the trials of fire and water are translated into encounters of passion and beauty.