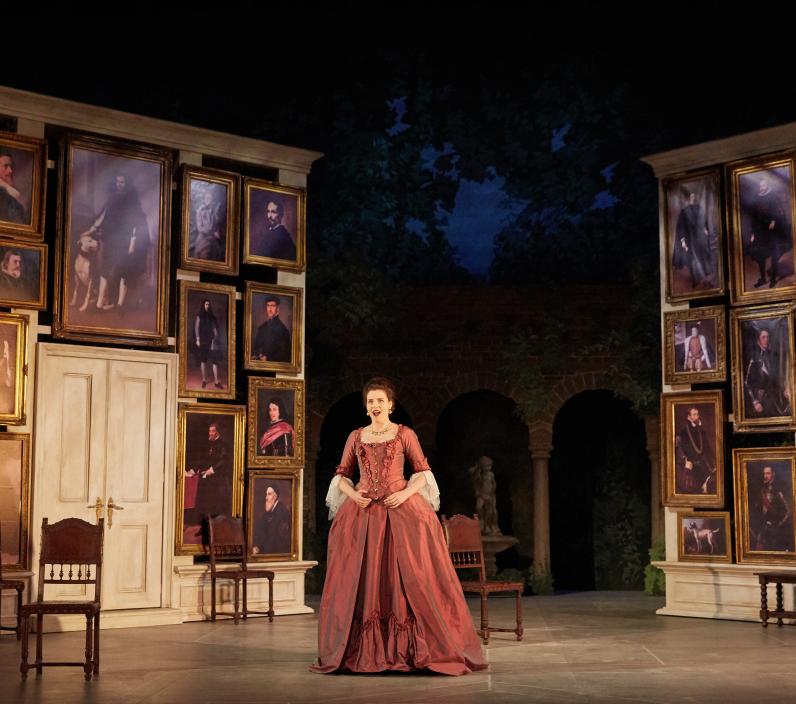 Mozart
This performance is no longer viewable as video-on-demand for rights reasons but other material about the production is still available.
Sung in
Italian
Subtitles in
English

For many people, one’s wedding day might feel dramatic. For Mozart’s Figaro, it is quite literally an opera! The action covers one day in the castle and grounds of Aguas Frescas, near Seville.

Marta Fontanals-Simmons sings the famous Cherubino aria, 'Voi che sapete' (Ladies, you who know what love is) in the 2017 Garsington Opera production of The Marriage of Figaro.

Ashamed and remorseful, the Count (Duncan Rock) asks the Countess  (Kirsten MacKinnon) forgiveness  for trying to seduce Susanna ("Contessa perdono!" – "Countess, forgive me!"). The Countess, more kind than he ("Più docile io sono" – "I am more mild"), forgives her husband and all are contented. The opera ends in universal celebration.

Kirsten MacKinnon discusses the role of the Countess in The Marriage of Figaro and what it has been like performing in John Cox's production at Garsington Opera.

Joshua Bloom talks about performing the title role in The Marriage of Figaro at Garsington Opera and what makes this opera so special.

It is the day of Figaro’s marriage to Susanna, maid to the Countess. Figaro, valet to the Count, is assessing the bedroom offered to him by his employer; it conveniently adjoins both the Count’s and the Countess’s apartments. Susanna points out that the room will also be convenient when the Count chooses to reinstate the ‘Droit de Seigneur’, a feudal practice in which a local Count can ‘deflower the bride;’ a practice that he has recently abolished. Figaro determines to outwit his master (‘Se vuol ballare,’ If you want to dance, I’ll play the tune).

But Figaro owes money to Marcellina, and has promised to marry her if he does not manage to repay her. He has also raised the ire of Dr. Bartolo, the Countess’s former guardian, for his role in helping bring about the Count’s marriage to the Countess. To complicate matters further, the young page Cherubino wants Susanna to intercede on his behalf with the Count, who has dismissed him from the castle after catching him alone with Antonio’s daughter, Barbarina.

Suddenly the Count shows up, causing disarray. Cherubino hides and hears the Count’s overtures to Susanna. The Count in turn hides, and overhears Basilio, the music master, making insinuations about Cherubino and the Countess. The Count emerges, discovers the unfortunate page, and sends him to rejoin his regiment.

It begins with a weeping Countess, lamenting the loss of the Count’s love (‘Porgi amor’). Figaro reveals his plan to outwit the Count: he has sent him an anonymous letter implying that the Countess has a lover. Susanna points out that Marcellina can still invoke the debt and stop the wedding, and a second plan is hatched. Susanna will agree to meet the Count in the garden, but Cherubino will go disguised in her place. Figaro instructs the women to dress Cherubino appropriately.

The page flirts with the ladies by singing his latest composition (‘Voi che sapete’). When he is half undressed, the Count arrives. Having received Figaro’s letter, he is in a jealous rage. Cherubino, hidden in the closet, knocks over a chair. The Countess, in a panic, pretends that the noise is Susanna, but refuses to unlock the door; meanwhile, Susanna rescues Cherubino, who escapes out of the window. Susanna locks herself in the closet.

The Countess attempts to explain to her husband the presence of Cherubino in her closet. She is as surprised as the Count when it is Susanna who emerges. The two women pretend that the whole episode was a trick to provoke the Count into better treatment of his wife. They confess that the letter was written by Figaro, who then joins them, unaware of the women’s revelations to the Count. When Bartolo, Basilio and Marcellina arrive with a law suit to force Figaro’s marriage to Marcellina, the Count is triumphant.

The Countess and Susanna open the third act with a plan to disrupt the Count’s amorous intentions. Susanna will agree to meet the Count that evening in the garden, but the Countess will go in her place, disguised as her maid.

On the advice of his legal consultant, Don Curzio, the Count insists that Figaro pay Marcellina at once or marry her. Figaro is saved by the timely revelation that he is the long-lost son of Marcellina and Bartolo; everyone but the Count and Don Curzio embraces their new relations.

Finally the wedding celebrations of Figaro and Susanna begin. Cherubino is unmasked among the bridesmaids, but Barbarina shames the Count into allowing him to stay at the castle. Susanna passes the Count the letter dictated by the Countess, confirming her evening rendezvous with him under the pine trees.

In the garden everybody is waiting:  the Count and Figaro for Susanna; the Countess for the Count; Bartolo and Basilio to witness the revival of the ‘Droit de Seigneur.’ Figaro rails against the faithlessness of Susanna (‘Aprite un po’ quegli occhi’); while she looks forward to the conclusion of her plans (‘Deh vieni, non tardar’).

The appearance of Cherubino is potentially disastrous, but the Count arrives and woos ‘Susanna,’ in fact his wife. The jealous Figaro is then confronted by Susanna, disguised as the Countess, but he recognises his bride and they are reconciled – witnessed by the Count, who believes he sees his wife in the arms of his valet. He denounces her; the real Countess unmasks herself and forgives her husband. The day ends in celebration.

A Conversation with John Cox and Dougie Boyd

Where do we start, to talk about what John Cox unhesitatingly calls ‘the best opera ever written’? We settle on the fact that it all takes place within the framework of a single day, and the way in which audiences are plunged directly into the characters’ lives.

Cox and Dougie Boyd have worked together before, on this opera and on Fidelio, and they clearly enjoy each other’s company and appreciate each other’s opinions.

‘It’s a question of momentum, I think’, says Boyd, ‘within the compressed time-frame – even when the music is serene, it’s never static. From the conducting point of view, it’s nothing to do with tempo, nothing to do with speed, but everything about a wheel that keeps on turning.’

‘You could apply that to all three of the Da Ponte operas’, says Cox. ‘Don Giovanni could take place within a night and a day, and Così fan tutte; the timeframe there is not much longer than a day. Anyway, to cut to the chase – The Marriage of Figaro is as much about the marriage of the Count and the Countess as it is about the marriage of Figaro and Susanna. One marriage is on the rocks as the opera begins; the other one just about happens in Act Three and by the middle of Act Four is practically in ruins. That kind of circumstantial compression is energising dramatically as well as musically, together with the fact that both marriages are so closely interrelated in their fates.’

‘That complexity and the fact that different emotions and states of mind can be expressed simultaneously through music is unique’, agrees Boyd, ‘and it’s one of the most magical moments in Peter Shaffer’s Amadeus. I went to the National Theatre’s production recently and have been thinking about it ever since. Mozart talks about how music is the only artform where you can have maybe four people expressing four different emotions at exactly the same time. And of course he’s absolutely right and he’s a consummate master of that. If you’re in the audience, you don’t have to shift your attention from one character to another, you can register the fact that he’s in love, she’s in despair, she’s afraid, he’s angry – Beethoven does it marvellously as well, with “Mir ist so wunderbar” in Fidelio.’ ‘And so does Haydn’, adds Cox, ‘in La fedeltà premiata. That could possibly have been Mozart’s model.’

Along with this revelatory way of making complex individual thoughts and emotions clear and communicative, in this opera Mozart and Da Ponte cut through existing conventions by giving each character – from the master, Count Almaviva, to Barbarina, the gardener’s daughter – their own weight and importance and individuality.

‘Coming back to stage this production for the third time’, says Cox, ‘I’ve been thinking about the Queen’s response to this opera. Do you know the story? She’d been invited to a performance at Glyndebourne to celebrate their 50th anniversary and George Christie, the chairman of the company, offered her a choice from the operas they were performing that season. She looked at the list and said “Figaro? That’s the one about the pin – I’ve seen that.” And she was quite right! Barbarina isn’t one of the major characters but by losing a tiny thing like a pin she is unwittingly the instrument of the Count’s undoing, and she also brings Figaro to the edge of the abyss. All of that is superbly crafted by Da Ponte.’

Boyd starts laughing – ‘And it all leads up to that most devastatingly painful and beautiful moment when the Count turns to beg the Countess for her forgiveness. I remember when we were rehearsing that last time, I was conducting and the Countess came out from behind a statue of Venus. The music reached that sublime point, and you suddenly stopped the rehearsal and asked: “Is that all you’re going to do there?”’

Both men roar with laughter. ‘Well’, says Cox, ‘it had been a wearing session, trying to get the lighting sorted, making the statue look as if it might have been there for a hundred years rather than ten minutes and I was thinking “All this needs now is the music and it will be fine” – and you didn’t quite come up with the goods.’ ‘OK, I forgive you’, says Boyd. ‘And I of course forgave you’, replies Cox.