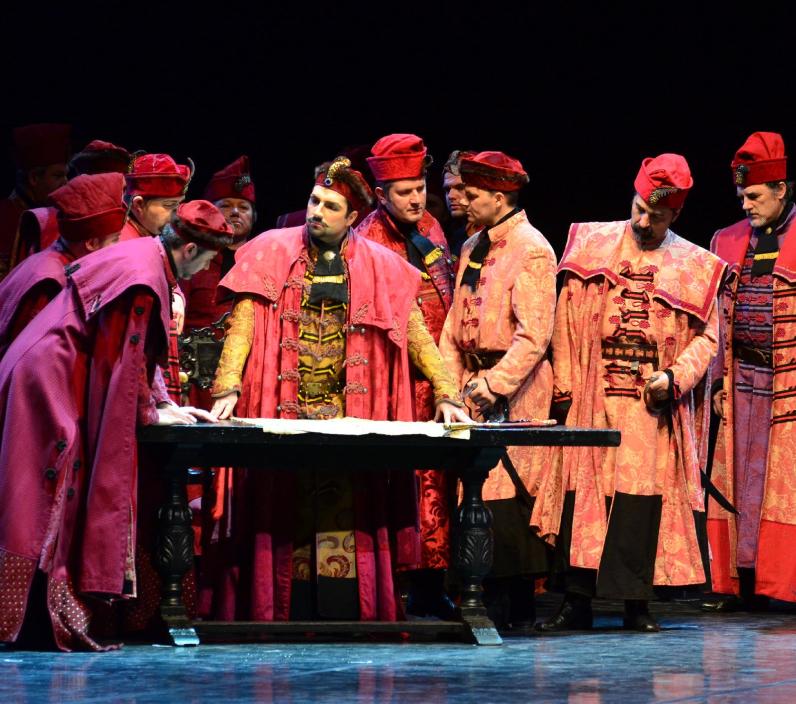 Zajc
This performance is no longer viewable as video-on-demand for rights reasons but other material about the production is still available.

Suliman the Magnificent and his Ottoman army are on the march to Vienna. Only one fortified town lies in their way, but its Croatian commander and small garrison of men are determined to stand their ground.

Ivan Zajc’s patriotic opera retells the story of Nikola Šubić Zrinjski’s daring leadership and heroic sacrifice during the real life Siege of Siget. Packed with powerful music – including the rousing male chorus ‘U boj, u boj!’ – it has held a treasured place in the Croatian repertoire ever since its wildly successful premiere in 1876.

Act III. Jelena (Ivana Lazar) has been brought to an underground room in the fortress to protect her from the approaching soldiers. To comfort herself, she sings an old song her mother taught her about a rose waiting to be plucked from a garden. Conducted by Nikša Bareza and directed by Krešimir Dolenčić.

Act III. The Croatian soldiers at the fort of Szigetvár know they will not survive their final charge against the Ottoman army. Small in number but full of courage, they are happy to die for their homeland. Conducted by Nikša Bareza and directed by Krešimir Dolenčić. Ivan Zajc wrote this climactic chorus ten years prior to the rest of the opera. It has achieved lasting popularity as a Croatian patriotic song, removed from the context of the opera, and as a staple song in Japanese glee clubs.

Who was Ivan Zajc, the composer of Nikola Šubić Zrinjski?

Ivan Zajc (1832-1914), was a Croatian composer, conductor, director, and teacher who dominated Croatia's musical culture for over forty years. Often compared to Verdi for his patriotism and musical style, he was a prolific composer who despite his professional duties managed to complete nearly 1,000 works.

At his camp in Belgrade, Suleiman the Magnificent draws up plans to conquer Vienna. The Ottoman Sultan is at an advanced age and ignores his doctor’s warnings regarding his poor health. The only obstacle on his way to Vienna is the fortified town of Szigetvár, which is defended by the Croatian governor Nikola Šubić Zrinjski. The grand vizier Mehmed Sokolović advises the Sultan to try and bypass Szigetvár altogether due to Zrinjski and his soldiers’s renowned bravery. But Suleyman is sure he will be victorious and orders the march on the fortified town.

In Szigetvár, Zrinjski’s daughter, Jelena, meets with Lovro Juranić, a warrior who is preparing for the upcoming battle. Jelena confides in her mother, Eva, telling her that she fears for Juranić’s life. They are joined by Zrinjski, who informs the family that the Ottomans are on the march. Juranić asks Zrinjski for Jelena’s hand in marriage. The father gives his consent, promising that the wedding will take place after the Ottomans have been defeated.

With Szigetvár under siege, Zrinjski’s soldiers ready themselves for the decisive battle. The warrior Gašpar Alapić advises Zrinjski to send his wife and daughter somewhere safe until the danger is over. But Eva is adamant that Jelena and she will stay there with their loved ones. Zrinjski has been urged by the Holy Roman Emperor to defend Szigetvár until help arrives. His soldiers all take a solemn oath to defend the fortified town to the last man.

At the Ottoman camp, celebrations take place to mark the fortieth anniversary of the Battle of Mohács. Suleyman is impatient because of Zrinjski’s resistance and sends Sokolović to Szigetvár with a message warning Zrinjski to surrender.

Zrinjski senses that he will not be able to hold off the enemy for much longer. The grand vizier arrives and offers Zrinjski the Croatian crown in exchange for his surrender, but threatens to torture his son should he refuse. The governor orders that the outskirts of the fortified town be abandoned and set on fire, then he sends Sokolović back with the message that Suleiman can enter the town himself if he dares.

The Sultan has died from natural causes. Sokolović keeps his death a secret from the Ottoman troops and orders another attack on Szigetvár.

Eva has brought Jelena to an underground room in the fortress to protect her from the approaching soldiers. The daughter can only dream of Juranić, who suddenly finds her in her hiding place. Jelena asks him to kill her, fearing that she will otherwise fall into the Ottomans’s hands. Juranić grants her wish, giving her a final kiss before stabbing her with his sword.

As Eva and Zrinjski say goodbye to each other, Juranić brings them the news of Jelena’s death. Eva sets the fortress on fire and the soldiers all head into the final battle. Szigetvár falls.

1° A battle against the odds

The Siege of Siget – also known as the Siege of Szigetvár or the Battle of Szigeth – was fought in 1566 as the Ottoman army under the nominal command of Sultan Suleiman the Magnificent was attempting an advance towards Vienna. For one month, 2,500 soldiers – mostly Croats – defended the small fortress of Szigetvár on the Habsburg frontier against over 100,000 Turkish soldiers and 300 cannons. Although the Ottomans eventually won, the outcome was a pyrrhic victory. Their heavy losses forced them to abandon their expansion in Europe, and the Austrian capital was not threatened again until the Battle of Vienna in 1683.

Leading the Habsburg defence was Nikola Šubić Zrinski, a Croatian-Hungarian nobleman and general. He was Ban of Croatia from 1542 until 1556, and royal master of the treasury from 1557 until 1566, which elevated the Zrinskis to become the most powerful family in the Kingdom of Croatia. He was located in Szigetvár when Suleiman began his push on Vienna. Zrinski wrote to Maximilian II, Holy Roman Emperor, who promised reinforcements, but these never arrived before the Ottomans reached the fortress. Both commanders died during the battle – Suleiman in his tent from natural causes, and Zrinski as he led a desperate and suicidal charge on the last day of the siege.

Zrinski's exploits at the Siege of Siget made him a well known European hero. He has been compared to Leonidas I for the way in which he inspired his soldiers to stand their ground against overwhelming enemy numbers. Their brave actions were recorded in a first-hand report by Zrinski’s scribe and chamberlain and later in an epic poem by his great-grandson. The importance of the battle was considered so great that the French clergyman and statesman Cardinal Richelieu described it as ‘the battle that saved civilization’. In Croatia, Zrinski became a symbol of national liberation, directed at different times in history against Ottoman, Austrian and Hungarian political influence.

Ivan Zajc (1832-1914), was a Croatian composer, conductor, director, and teacher who dominated Croatia's musical culture for over forty years. After studying at the Milan Conservatory, he moved to Vienna, where he gained early success as a composer of operettas. Influenced by academics, students and poets from his homeland, however, Zajc decided to devote himself to nurturing Croatia’s musical identity rather than seeking international fame for himself. He moved to Zagreb in 1870, whereupon he was made director and conductor of the Croatian Opera and director of the Croatian Music Institute. Often compared to Verdi for his patriotism and musical style, he was a prolific composer who despite his professional duties managed to complete nearly 1,000 works.

Zajc’s masterpiece is his opera Nikola Šubić Zrinski, which recounts the story of the Siege of Siget. Thoughtfully profiling the characters of Zrinski and Suleiman in accordance with historical facts, the composer and his librettist, Hugo Badalić, also assigned important musical and dramaturgical roles to Zrinski’s wife, Eva, and his daughter, Jelena. The opera’s premiere in 1876 was well received by audiences and critics alike, and it has remained in the Croatian repertoire ever since. Its enduring fame is due in part to its climactic chorus, ‘U boj, u boj!’ (‘To battle, to battle!’), which Zajc wrote ten years prior to the rest of the opera. It has achieved lasting popularity as a Croatian patriotic song, removed from the context of the opera, and as a staple song in Japanese glee clubs.