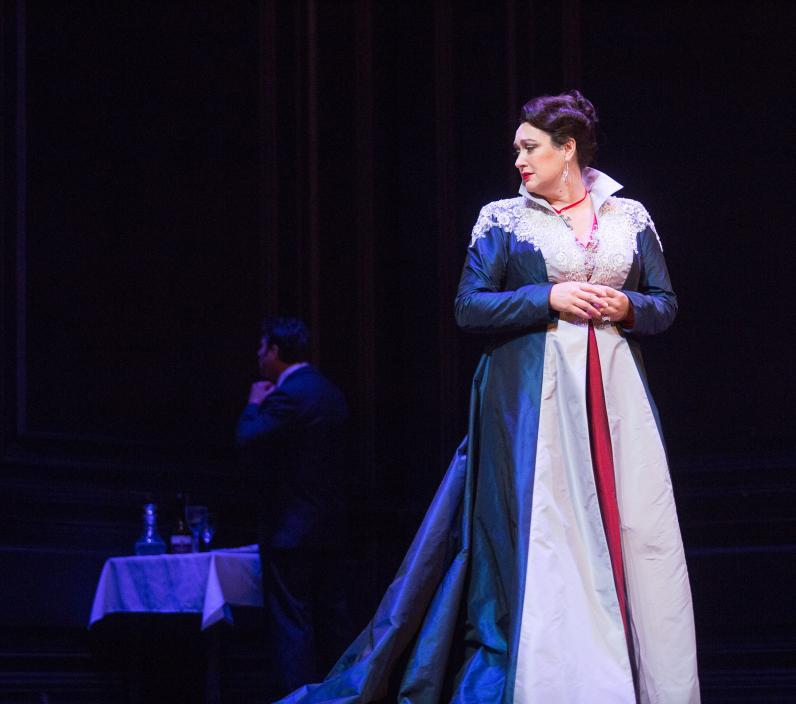 Love, lust and political intrigue fill the world of a passionate singer. When her lover is imprisoned by a police chief, Tosca takes matters into her own hands with dramatic consequences.

Copyright
Albert Comper
Behind the scenes

'Cavaradossi's music is very beautiful, so gorgeous,' says tenor Simon O'Neill about the character that he embodies in New Zealand Opera's production of Tosca.

Morning. The Church of Sant’Andrea della Valle in Rome.

Cesare Angelotti, a political prisoner, has escaped from the Castel Sant’Angelo. He finds refuge in the Attavanti family chapel, using a key hidden in the church by his sister, the Marchesa Attavanti. As the Sacristan kneels in prayer for the Angelus, Mario Cavaradossi arrives to continue work on a painting of Mary Magdalene. The picture, he admits, has been inspired both by his mistress, the singer Floria Tosca, and by a young woman he has seen at prayer in the church. As the Sacristan leaves, Angelotti emerges. Cavaradossi recognises him and promises to help. Hearing Tosca’s voice outside, he gives Angelotti a basket of food and hurries him into hiding once more. Tosca, however, has heard their voices in the church; when she finds Mario alone, her jealousy is aroused. Cavaradossi soothes her, until she sees the Magdalene portrait. Cavaradossi calms her: they agree to meet later. Angelotti emerges from hiding as the prison cannon announces that his escape has been discovered. Cavaradossi escorts him to safety. The Sacristan returns: a great political victory has been won, a Te Deum is to be sung in celebration, and Tosca will perform at the Farnese Palace that evening. The altar boys’ revels end abruptly, however, at the arrival of Baron Scarpia, the Chief of Police, whose men have tracked Angelotti to the church. A search reveals an empty food basket in the Attavanti chapel, together with a fan bearing the family’s crest. Has Cavaradossi, already politically suspect, helped an escaped prisoner? Tosca returns: her performance that evening means she and Mario cannot meet that night. Cavaradossi’s absence arouses her suspicions, further fuelled by Scarpia’s insinuations and his revelation of the Attavanti fan. Tosca rushes away and Scarpia sends his men in pursuit. As the Te Deum reaches its climax, he relishes the thought of victory over both Cavaradossi and Tosca.

That evening. Scarpia’s apartments at the Farnese Palace.

Scarpia, anticipating success, has sent for Tosca. His assistant, Spoletta, returns: a search of Cavaradossi’s villa has failed to find Angelotti, but Cavaradossi has been arrested in his place. As Tosca’s voice is heard from the concert nearby, Cavaradossi refuses to answer Scarpia’s questions. Frustrated, Scarpia sends him to the torturers. Tosca arrives. Scarpia’s questioning grows more urgent until, hearing Mario’s cries of pain, she reveals Angelotti’s hiding place. Mario is brought in, but his reconciliation with Tosca is short-lived as Scarpia reveals her betrayal. Suddenly Sciarrone enters: news of the political victory was premature – they have suffered a major defeat. Alone with Scarpia, Tosca bargains for Mario’s life. His terms are simple and, when she reluctantly agrees, Scarpia instructs Spoletta to arrange a mock execution at dawn. After that, the lovers will be free to leave with a safe-conduct provided by him. Victorious at last, Scarpia rushes into Tosca’s embrace and finds only death on the blade of a knife.

A shepherd boy sings as his flock passes by. As Cavaradossi, having bribed his jailer, writes a last letter to Tosca, his composure breaks down. Suddenly, Tosca arrives, revealing Scarpia’s death and the impending mock execution. Spoletta and the firing squad enter. The lovers are confident – Tosca even instructs Mario how to act – but Scarpia plays the final trick: Mario’s death is for real. As Scarpia’s murder is discovered, Tosca leaps to her own death.

5 things to know about Tosca

Giacomo Puccini's Tosca has been one of the most popular operas in the repertoire ever since its premiere in 1900, just 14 days into the new century. Unlike most operas, it has a precise and concise setting: the action happens in Rome between noon on Tuesday 17th June 1800 and dawn the following day. During those eighteen hours, all the major characters suffer violent deaths.

The real motivations of the characters in Tosca are strictly personal. Nevertheless, the politics and ideals of the time are always in the background. Tosca is set at a critical time in the military campaigns of the French general  - and later emperor - Napoleon Bonaparte. The action on stage shows the reactions of the people of Rome to news of Napoleon’s apparent defeat, then actual victory at the Battle of Marengo. It reflects the divided sentiments of the people of Rome, torn between their loyalty to the crown and hopes for new freedoms under a new ruler.

Puccini’s opera is a violent drama based on Victorien Sardou's hit play La Tosca, which was written as a star vehicle for the famous French actress Sarah Bernhardt. The composer saw La Tosca at least once in Milan and Turin. He wrote to his publisher, Giulio Ricordi, begging him to get Sardou's permission for the work to be made into an opera: "I see in this Tosca the opera I need, with no overblown proportions, no elaborate spectacle, nor will it call for the usual excessive amount of music.” Sardou replied that he would prefer his play to be adapted by a French composer, and he complained about the reception La Tosca received in Italy. Nevertheless, he and Ricordi were able to negotiate acceptable terms.

Puccini visited Sardou in Paris to discuss the adaptation. The composer wanted to replace a patriotic hymn of the imprisoned Cavaradossi in Act III with a love song, which the playwright allowed. But while Sardou wanted an abrupt, thundering finale, Puccini disliked the suicide at the end of the play. He had in mind a different ending, where, rather than leaping, Tosca would go mad, collapse, and die on the body of her lover. Evidently on this particular point the composer lost the argument.

Tosca was Puccini’s next opera after his first undisputed success, La bohème. Comparing the two, the composer said: “The colour in Tosca is no longer romantic and lyrical as in La bohème, but sensual, passionate and murky. Scarpia and Spoletta and shady individuals, and the heroes are not as docile as Rodolfo and Mimì, but active and brave".

The plot plays with passions rather than feelings. Tosca is a story of cheating and doubt, where everything - especially love - is troubled by jealousy. Even the marginal characters like the sacristan and the prison guard lie or act dishonestly. Everyone fights deception with deception, which creates a suffocating atmosphere of suspicion and doubt. It is these qualities that place Tosca firmly in the category of verismo opera, a style of Italian realism linked to literary and artistic movements of the same name.

As well as taking place at a specific time, Tosca takes place in three specific, real-life locations: the Basilica di Sant'Andrea della Valle, which is famous for its large painted dome; the Palazzo Farnese, which serves today as the French Embassy; and the Castel Sant’Angelo, which was commissioned by the Roman Emperor Hadrian as a mausoleum for himself and his family then subsequently used as a papal fortress and castle.

A church, a palace and a castle. These are powerful locations built by the great architects of Rome to project the power of her leaders and institutions. Caught in the middle of it all is Floria Tosca, a singer who lives only for art and love – powerful forces in themselves. From the start of Tosca until the last note, opposing forces fight to the death, but they are forces that cannot escape each other for they are eternally bound: love and jealousy; art and deception; the cruel injustice of man and the anticipated justice of God.

‘Nobody could listen to those opening cords of Tosca without feeling their spine tingle,’ says Stuart Maunder, who directed the opera in 2015, during his stint as General Director of the New Zealand Opera. Disentangling the plot from its Napoleonian era, Maunder transposed his Tosca to Italy in the 1950s, a country in the grips of the Cold War, a regime dominated by foreign interests and the Catholic Church, where the mafia was the sinister power behind the government; a time of secret police, of terror, suspicion and corruption supporting a fragile conservative regime.

Emphasised on stage by austere, yet elegant sets and striking costumes, the updated period reflects the libretto’s inherent brutality no less well than its original timeframe. Despite his emphasis on the historical context, Stuart Maunder argues for Tosca’s ultimate universality. ‘The bottom line is: it’s a classic love triangle, where both men are in love with the same woman and one of them uses power in order to get to her. He can only have success in that relationship if he destroys the other one.’