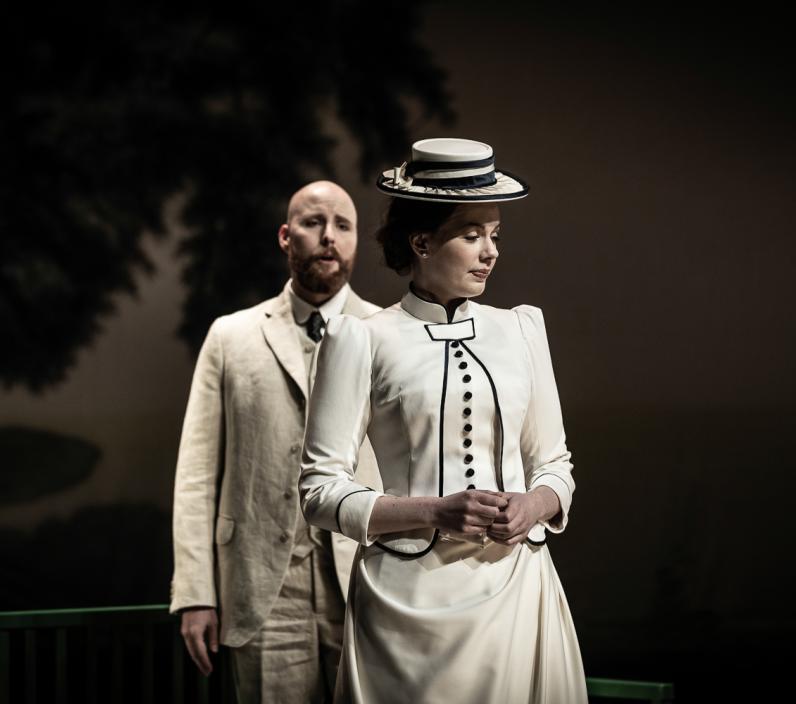 In a stuffy provincial town, a passionate and idealistic poet accompanies a dutiful young lady to a ball. He falls madly in love with her - but she is already engaged to another.

Bergen National Opera presents Massenet’s great opera in a new production directed and designed by Antony McDonald. The Lithuanian tenor Edgaras Montvidas sings the title role - regarded as one of the most poetic and expressive in the French repertoire - alongside Cardiff Singer of the World 2017 competition winner Catriona Morison as Charlotte.

Behind the scenes of the costumes of Werther

A lot of thought goes into making the costumes for opera, not to mention material. In this video, Cathrine Ahlsen, Head of Costumes at Bergen National Opera, gives us a behind-the-scenes look at Charlotte's three dresses and Werther's suit as her team prepare for a new production of Massenet's romantic tragedy.

At his home in the Hessian town of Wetzlar, the bailiff tries to teach his youngest children a Christmas song. His two drinking buddies, Johann and Schmidt, are amused at his struggle to practice Christmas songs in the middle of summer. The bailiff informs them that his eldest daughter, Charlotte, is getting ready for the evening's ball, and that the young poet Werther is to accompany her as Charlotte's fiancé, Albert, is away on business.

Arriving at the bailiff’s house, Werther is overwhelmed by the glorious summer day and pays tribute to nature through poetry. He is interrupted by the sound of children: it is Charlotte who is hurrying to give her young siblings supper before she leaves for the evening’s entertainment. Werther is completely captivated by what he sees. The bailiff says that he has become a widower, and that it is Charlotte who takes care of the children and the house now that her mother is dead.

After Werther and Charlotte have left for the ball, Albert suddenly arrives after having been away from town for six months. He is disappointed that Charlotte is not at home but asks Sophie, the bailiff’s second daughter, not reveal that he is back: he wants it to be a surprise for everyone the next day.

After Werther and Charlotte return from the ball, Werther confesses his love for her. But he becomes full of despair when Charlotte tells him what she promised her mother on her deathbed: that she must take care of the family and marry Albert.

It is a brilliant and sunny Sunday, and Albert and Charlotte have been married for three months. Together with other guests, they flock to the church to celebrate the golden wedding day of the pastor.

Werther observes Charlotte and her husband from a distance and he mourns the loss of what he has decided is the great love of his life. Albert tells Werther that he understands his despair and forgives him. Werther lies to Albert that he now sees Charlotte as nothing more than a good friend.

The two men are interrupted by the fun-loving Sophie who declares that as the air is full of merriment she’d like to celebrate and have the first dance with Werther. But Werther retires, ashamed at having lied to Albert about his love for Charlotte. When Charlotte arrives, Werther again declares his passion for her.

Charlotte, a little distraught, repeats that she must follow her duty and that she belongs to another. She demands that Werther leave town, but weakens and asks him to come back later, at Christmas time. Werther states that he will never return again.

Autumn has turned to winter, and on Christmas Eve Charlotte reads all the letters from Werther with despair and overwhelming emotion. Sophie tries to cheer her big sister up, but to no avail.

Werther suddenly arrives, and he and Charlotte exchange memories of the time before they were separated. Werther quotes from a passionate poem he was in the process of translating. The meeting is intense, but Werther leaves Charlotte abruptly.

Albert comes home and tells Charlotte he has heard from townsfolk that Werther has been visiting her. He also shows her a letter he has just received from Werther: ‘I'm going on a long journey. Will you lend me your guns?’ Charlotte senses a terrible looming tragedy and rushes away.

That night, Charlotte makes her way to Werther’s house. In his room, she finds him wounded, but he forbids her to fetch for help. They finally embrace and she declares her love for him before he dies in her arms.

5 things to know about Werther

Written in just five-and-a-half weeks in 1774, Johann Wolfgang von Goethe’s The Sorrows of Young Werther captured better than anything that had come before the conflict between individual freedom and the strict framework of social conventions. The loosely autobiographical epistolary novel had a profound impact on its readers of that time and it thrust its young author into the international literary limelight. In the novel, Werther is depicted as a passionate, young dreamer. All sensory impressions are experienced with full force, and when he falls in love with Charlotte, despite her being engaged, reason makes way for fierce emotions. Line by line, the reader can follow Werther's emotional life, which becomes more and more painful every day. He cannot get what he loves so much, and this inner pain grows to be so unbearable that he finally commits suicide.

2° The age of anxiety

Just over 100 years later, the novel received a renewed interest through Jules Massenet's opera, which was completed in 1887. Goethe's detailed depiction of inner feelings, the pessimism of Werther’s tragic end and the question of women's place in society resonated with the anxieties of fin de siècle France. Massenet's three librettists - Édouard Blau, Paul Milliet and Georges Hartmann - interpreted the novel as contemporary Parisians but kept the action in Wetzlar, the Hessian town where Goethe had lived at the time. The result is an intimate and effective drama where both Charlotte and Werther fight each other's inner struggles until they finally embrace and open up to each other what it is already too late.

For Massenet, this was a challenging text to set to music. Admittedly, he was a master of atmospheric tone-setting, but the inner life of the soul required a special grip. As with many composers of the 1880s, he was inspired by Richard Wagner's use of leitmotifs. Without directly copying the German, who had died two years before work began on Werther, Massenet was able to plant memorable musical motifs to illustrate particular emotional and dramatic moments. Inserted into a stream of romantic melodies, they helped to mirror the tension felt by the two protagonists, Werther and Charlotte. In this way, Massenet was able to distinguish between outer and inner action by means of musical instruments and at the same time create depth and contrast in the work as a whole.

When Massenet presented his finished score of Werther to the director of the Opéra-Comique in Paris, he was in for disappointment. The director thought the music was far too modern, and that suicide was not something appropriate to show on stage. The composer had to wait five years before the premiere of his new work, which in the end took place in Vienna in a German translation. In this city where Goethe's novel was well-known, the opera became an instant success and played an unbroken run of 42 performances. It would be another ten years before Paris was ready for Werther, by which time it had already taken New York, London and Saint Petersburg by storm.

In Bergen National Opera’s new production of Werther, the opera is re-interpreted. The veteran director and set designer Antony McDonald sets the action not in the time of Goethe but in that of Massenet when the French composer wrote his opera. We are still in the town of Wetzlar, but the rococo fashion is abandoned in favour of an airy aesthetic inspired by the Danish painter Vilhelm Hammershøis. The Dane rebelled against overcrowded Victorian rooms, preferring his walls to be completely white or light gray. The interiors of his paintings are sparsely furnished, and natural light is always welcome in, creating striking shadow effects. McDonald has recreated all of this in the staging to let the painful drama between two souls unfold in a pure, unencumbered form.