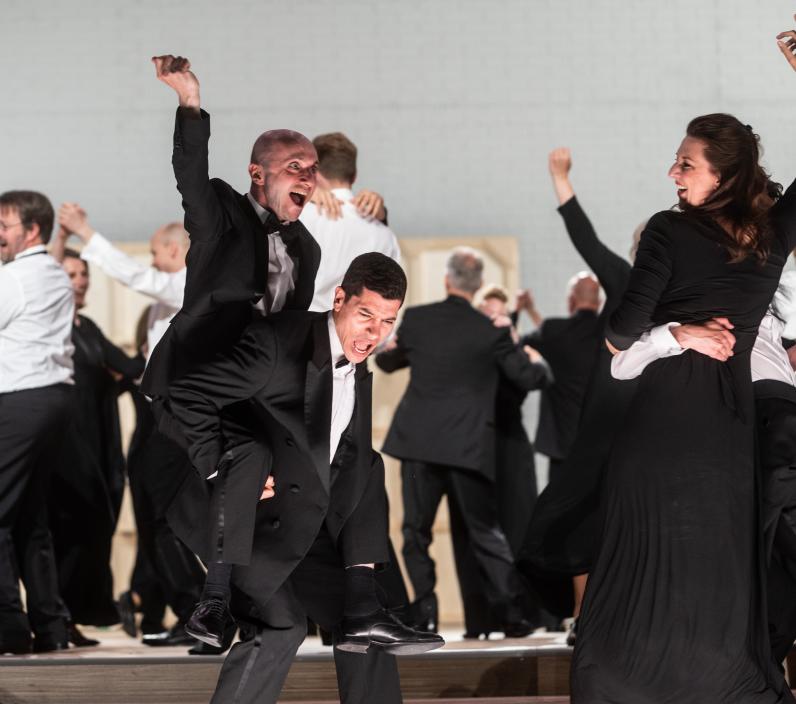 Weber
This performance is no longer viewable as video-on-demand for rights reasons but other material about the production is still available.
Sung in
German
Subtitles in
English
German
Dutch

Max, a young hunter, must win a shooting competition to claim the hand of his beloved Agathe. But on the eve of the competition, seemingly having lost all shooting prowess, Max allows himself to be convinced by his rival Kaspar to make a pact with the devil to use seven magic bullets which never miss their target.

Wagner said that Carl Maria von Weber’s early-Romantic gem was the most German of German operas.  With touches of the eerie supernatural, Der Freischütz is an irresistible mix of colourful folklore, tender romance, and a passionate struggle between good and evil - all captured in Weber’s tuneful and dramatic score. Successful Russian theatre, opera and film director Kirill Serebrennikov makes his debut in Amsterdam. In his approach to the opera, the struggle for success is transposed from the world of hunters and that of artists. German tenor Benjamin Bruns and South African soprano Johanni van Oostrum are opera’s young amorous couple with Patrick Hahn conducting the distinguished Royal Concertgebouw Orchestra.

For his Amsterdam premiere, Serebrennikov stages a dangerous deal with the devil.

Behind the scenes of Der Freischütz

In this new and unconventional production from Dutch National Opera, director Kirill Serebrennikov seeks parallels between Der Freischütz by Carl Maria von Weber and the opera world, in which ambition, fear of failure and superstition feature just as prominently. Gone is the German forest and we find ourselves in a rehearsal studio full of artists.

In a rehearsal room, we meet a group of singers who are involved in Carl Maria von Weber’s Der Freischütz: an opera about the ambitious young hunter Max, who has to win a shooting competition in order to marry the love of his life – just when his shooting skills seem to have gone downhill. His insecurity leads him to make a pact with the devil.

We see parallels between the characters in Der Freischütz and the singers who play them. They too are plagued by fears – of missing notes, of not making a name in the world of opera or of losing everything they have worked so hard for to achieve. Superstition, envy and manipulations run wild as the singers try everything in their power to prove themselves to the one person who – like a god and the devil in one – pulls all the strings: the conductor.

The world is more complex than good versus evil

Gone are the dense German forest and its community of hunters in this new production from Dutch National Opera. Instead, the world of opera itself takes centre stage in Kirill Serebrennikov’s new production of Carl Maria von Weber’s Der Freischütz.

How did you get the idea to direct Der Freischütz?
Kirill:  When Der Freischütz was suggested to me by Sophie de Lint, Director of Dutch National Opera, I immediately saw the possibilities. I had seen an old production of the work in Stuttgart by Achim Freyer, and I knew that the musical numbers and the speaking parts of the opera are not truly integrated. That makes it possible to take the opera in another direction, to do something completely different with it, while still maintaining Weber’s fantastic music.
Daniil: Because Der Freischütz is a Singspiel, the opera in some ways resembles a musical more than an opera. In opera, music and text are continuously deeply intertwined from beginning to end. In Der Freischütz, that’s not the case, which gives you room to alter the dramaturgy of the piece.

How did you get the idea to set Der Freischütz in the world of opera? To turn it into an opera about opera?
Kirill: Der Freischütz had a great influence on composers who came after Weber. It has a firm place in the history of opera. So I started thinking about opera itself. Not just the art form, but also the business and the effort that goes into it. Hundreds of professionals come together in the pit, in the wings, on stage, just to create something that is very fragile; something extraordinary that exists only in the moment and disappears when the curtain goes down. So I started seeing similarities between the world of Der Freischütz and the world of opera. People who want to make it in opera dedicate their lives to the art form. It’s like a monster: it eats up time and energy, and requires a lot of sacrifices. That’s why faith, tradition and superstition also play a very important role in opera.
Daniil: Like hunters hitting their target, opera singers have to hit their notes. If they fail to do so, they risk losing a lot, just like Max.
Kirill: The orchestra or even opera as a whole can be compared to the forest: a world that surrounds you, that can be threatening and comforting at the same time. And the conductor resembles Samiel, the diabolical supernatural figure in Der Freischütz, who is pulling the strings. He decides who gets a role, who deserves a place in the spotlight, and who is fired. Performers want to please him; he has the power to make artists succeed or fail.That’s why the spoken part of Samiel is performed by our actual conductor, Patrick Hahn.

You also added a character called The Red One. What purpose does he serve?
Kirill: He is like a mediator between the stage and the audience. His purpose is to explain what’s happening. He connects the original story of the opera and the music of Weber to our new plot. He points things out and connects them. But he’s not just there to explain; he also triggers responses from the other performers. But he’s not the only one to break down the fourth wall. The characters do so as well in short spoken monologues, in which they address the audience directly. In these monologues, they share very private, intimate things.

How do you add complexity and modernity to a character like Agathe?
Daniil: In traditional German opera at the beginning of the 19th century, there is this ideal of women as childish, naive and pure. That’s what Agathe embodies.
Kirill: In Weber’s opera, Agathe is actually stronger than Max because she is steadfast in her faith, goodness and piety, whereas Max falls in with dark powers. How do you convey that strength to a modern audience and make her relatable? We decided to stick with her strong faith, but change her religion: our Agathe believes in music and that she’s doing everything right to serve it and her career.

Apart from Weber’s music, you have also included music from Tom Waits’ The Black Rider, a music theatre piece which premiered in 1990, with texts by William S. Burroughs and directed by Robert Wilson. Why?
Kirill: The Black Rider tells the same story as Weber’s opera, dealing with the same characters, but with a great sense of irony. For me, that was an important reason to include music from The Black Rider. For us, people living in the twenty-first century, humour is a strong weapon to help us see things more clearly. It creates a certain critical distance.
Daniil: We were very careful in finding the right place for the right music. We had a long list of favourites, but there was a lot that we simply couldn’t make work. What we have now are three songs, one in each act, that fit the dramatic and musical moment.

How do you connect the music to your new dialogues?
Kirill: With our new text, we are mirroring the plot of Der Freischütz. There is a connection between the characters and what is happening in the original opera. So rather than taking the opera in a completely random direction, I think we have added new layers to what, in a sense, was already there in the original.