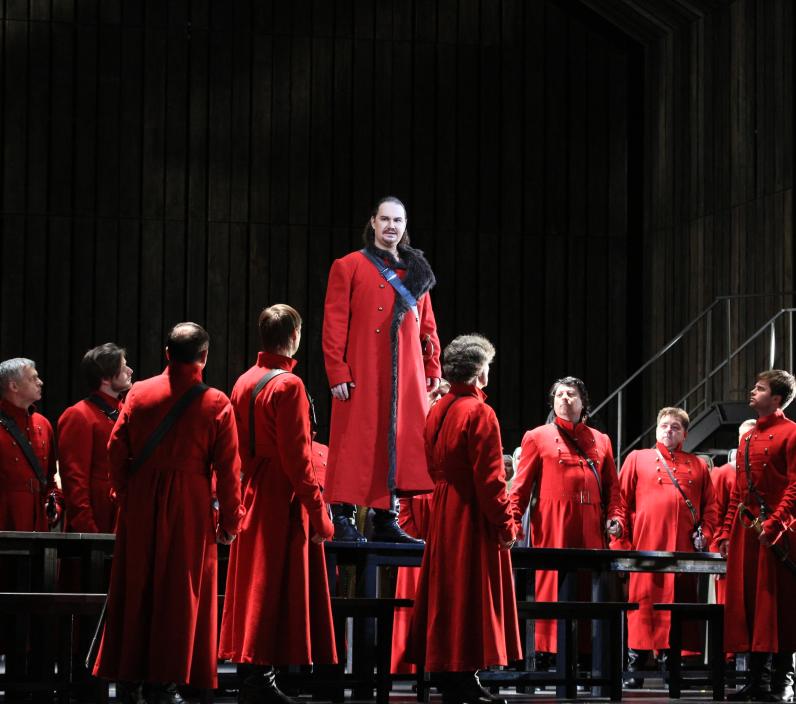 Mussorgsky
This performance is no longer viewable as video-on-demand for rights reasons but other material about the production is still available.

When a power vacuum opens up in Tsarist Russia, a ruthlessly ambitious prince conspires with the Streltsy militia and the schismatic Old Believers to usurp the throne.

Based on real life events surrounding the Moscow Uprising of 1682, Mussorgsky’s political thriller is a powerful portrayal of a country in crisis. This 2015 production by Moscow State Stanislavsky Music Theatre uses Shostakovich's orchestration with a finale by Vladimir Kobekin.

Tsar Peter’s troops are on their way towards the Streltsy. They call for Ivan Khovansky (Dmitry Ulyanov) to give them orders. But Khovansky refuses to lead the Streltsy into battle and advises them to disperse to their homes.

Act III. Shaklovity (Anton Zaraev) enters the place where the Streltsy are sleeping. He is worried for Russia's future and wonders what sort of force is needed to save her from her enemies.

The morning after a revolt by the Streltsy militia that saw much bloodshed, Moscow begins to return to normal. Shaklovity, a diplomat, dictates to a clerk a letter in which he claims that the Khovanskys - both father and son - were the instigators of the revolt. The clerk reads aloud the list of those perished during the revolt. Prince Ivan Khovansky, head of the Streltsy, leads his squad to patrol the city of Moscow. Ivan Khovansky’s son, Andrei, pursues a German girl called Emma. Marfa, Andrei’s former lover, tries to protect Emma, but then Ivan Khovansky commands the Streltsy to take the German to his chambers for himself. Andrei does not want to surrender the girl to his father, and the two prepare to fight. Dosifei, leader of the schismatics, stops them just in time. He appeals to them to forget their disagreements and to unite in the face of upcoming misfortune - the division and downfall of Russia.

Prince Golitsyn, an all-powerful minion of the regent Sophia, has summoned Marfa to tell his fortune. When she foretells his forthcoming disgrace and exile, the frightened Golitsyn gives the order to have Marfa drowned. Prince Ivan Khovansky comes to Golitsyn followed by Dosifei, who in his layman past was known as Prince Myshetsky. Each one of them fails to persuade the others as to the right action to take against the young Tsar Peter. Marfa returns and tells how Peter's soldiers rescued her from her execution. Shaklovity brings a frightening piece of news: Tsar Peter has received the accusation against the Khovanskys and has ordered an investigation.

Susanna, a schismatic, judges Marfa for giving in to sinful temptation. Dosifei stands by Marfa and condemns Susanna for speaking ill of another. Shaklovity enters the place where the Streltsy are sleeping. He is worried for Russia's future and wonders what sort of force is needed to save her from her enemies. After the Streltsy wake up, a clerk brings them grave news: Peter’s troops are on their way towards them. The Streltsy call for Ivan Khovansky to give them orders. But  Khovansky refuses to lead the Streltsy into battle and advises them to disperse to their homes.

Ivan Khovansky is ill at ease even though he feels safe inside his own house. Varsonofyev, a minion of Prince Golitsyn’s, tells Khovansky that he is in danger, but Khovansky ignores the warning and has the messenger flogged. He orders his Persian slaves to dance for him but then Shaklovity enters and assassinates him.

The disgraced Prince Golitsyn is sent into exile. Dosifei reflects on the fate of the two princes. Marfa informs him that the Old Believes will be Tsar Peter’s next target. Andrei confronts Marfa about Emma, as the girl has been sent across the border, out of his reach. When Andrei attempts to summon the Streltsy, they appear bearing instruments for their own execution. Marfa offers Andrei asylum amongst the Old Believers instead. The condemned Streltsy pray for God’s mercy but their wives insist that they should be executed as planned. At the last moment, a guard proclaims that Peter has pardoned them.

Dosifei and his followers have taken refuge in a hermitage. Rather than be captured by the Tsar’s men, he exhorts the brethren to prepare for martyrdom. Andrei is still looking for Emma but Marfa reminds him of their own love and promises not to leave his side. As the Old Believers prepare their funeral pyre, they hear Peter’s soldiers approaching. Marfa lights the pyre and the schismatics sing a final hymn as they commit mass self-immolation.

The second half of the 17th century was a turbulent time in Russian history. Concerned that the Russian Orthodox Church had drifted from the established practices of the Greek Church, Patriarch Nikon issued a number of reforms in 1654 to bring it back in line, such as replacing the two-finger sign of the cross with the three-fingered version and changing the direction of procession from clockwise to anticlockwise. But rather than bringing the Eastern Orthodox Church closer together, it instead caused a schism amongst Russian believers, known as the Raskol.

Twelve years later, the Old Believers who resisted Nikon’s reforms were anathematised and stripped of all civil rights. Over the next two decades, the State had the most active of them arrested and executed several of them, including their leaders. Fleeing from further persecution, many Old Believers fled Russia altogether. Those that stayed were treated with more tolerance under Peter the Great, though they had to pay double taxation and a separate tax for wearing a beard. The Moscow Patriarchate revoked the anathemas only in 1971 and today there are an estimated 1 to 2 million Old Believers living mainly in Russia, Eastern Europe and North America.

2 A Game of Thrones

A second cause for concern at the time was the succession of the throne. Tsar Feodor III died without children in 1682 and so the crown passed to his younger brother, Ivan V. But since he had serious physical and mental disabilities, Ivan’s reign could only be formal, and a power struggle ensued for influence over the administration of the Tsardom. Relatives of Ivan and his sister, Sophia, formed one faction, while relatives of their half brother, Peter, who was born to a different mother, formed another. Each spread conspiracy rumours about the other and stirred up riots in the streets of the capital. A mob consisting of the Moscow Streltsy regiment took over the Kremlin and killed two of Peter’s uncles. After a week of looting and bloodshed, a settlement was agreed: the 9-year-old Peter, who would later be known as Peter the Great, would be crowned co-monarch and Sophia would act as regent. 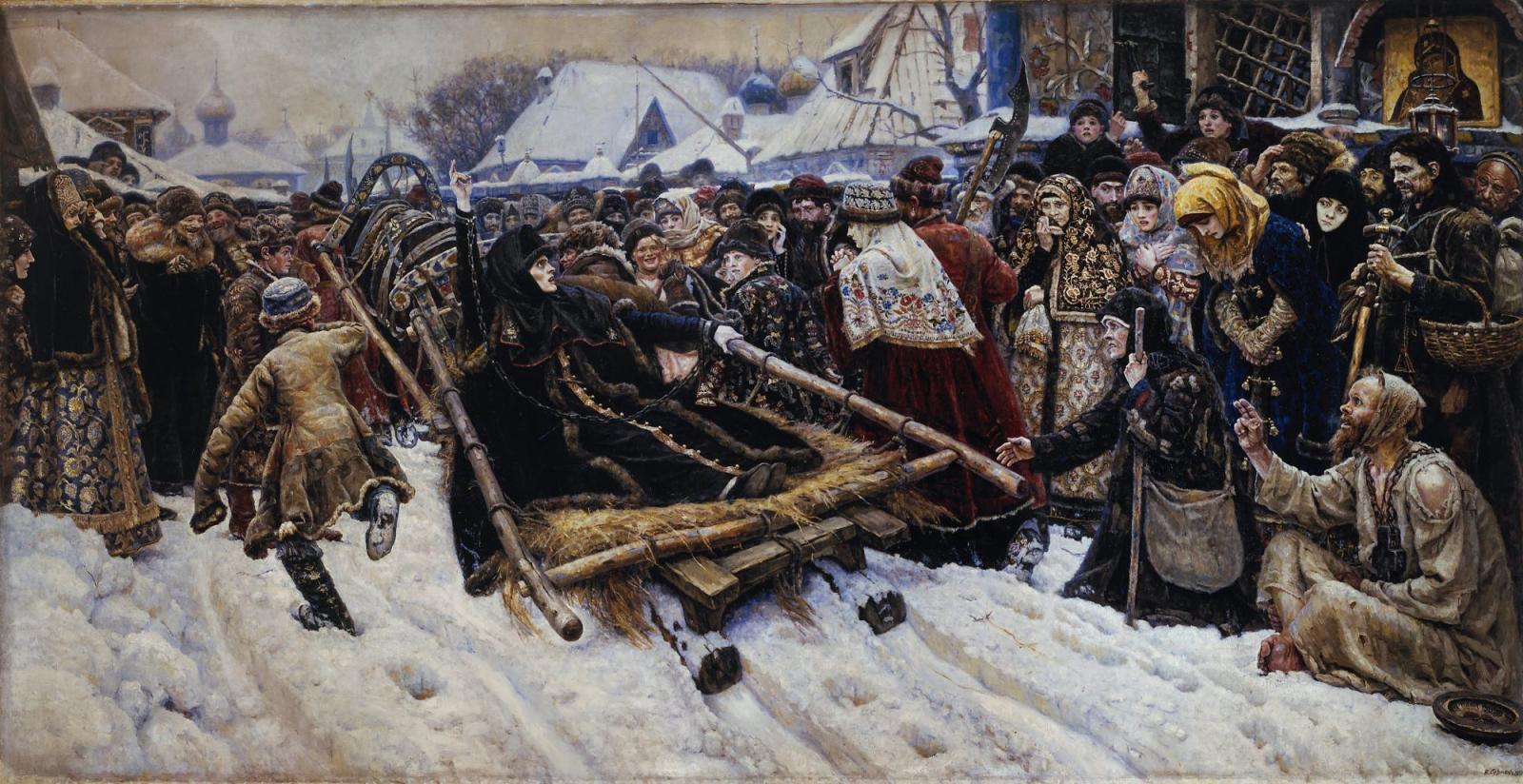 Later that year, Prince Ivan Khovansky, Sophia's close associate and one of the leaders of the rebellious Streltsy, turned against her. Supported by the Old Believers, Khovansky, who supposedly wanted to install himself as the new regent, demanded the reversal of Nikon's reforms. Sophia and her court had to flee the Moscow Kremlin and sought refuge in the Trinity Lavra of St. Sergius. Eventually, Sophia managed to suppress the so-called Khovanshchina (Khovansky affair) with the help of the diplomat Fyodor Shaklovity, who succeeded Khovansky in charge of the Muscovite army. She would rule as an autocrat for seven years until Peter, then age 17, took power from his half-sister and forced her to enter a convent, where she gave up her name and her position as a member of the royal family.

The critic Vladimir Stasov brought this episode of Russian history to the attention of his friend, the composer Modest Mussorgsky, who had used another Russian crisis of succession as the basis of his opera Boris Godunov. Mussorgsky wrote his own libretto for Khovanshchina based on historical sources and worked on the opera from 1872 to 1880. He died the following year leaving it unfinished and unperformed.

Nikolay Rimsky-Korsakov completed and orchestrated Khovanshchina for its premiere at the Mariinsky in February 1886. He made many cuts and changes to the score and altered the harmony. When Sergei Diaghilev wanted to stage the opera in Paris in 1913 he commissioned Maurice Ravel and Igor Stravinsky to write new orchestrations of certain passages omitted by Rimsky-Korsakov. He also had Stravinsky compose a completely new final scene, the Immolation chorus, based on an actual Old Believers chant that Mussorgsky had himself written down for use in this scene. Dmitry Shostakovich’s orchestration, made in 1958-9, reverts essentially to Mussorgsky’s own score, and it is his version that is most often performed today. This performance uses Shostakovich's orchestration with a new finale by Vladimir Kobekin.

‘There’s a lot of wonderful music in the world, but nothing like this,’ says Alexander Titel, Artistic Director of Opera at Moscow State Stanislavsky Music Theatre. Khovanshchina had never been staged at the theatre before 2015 but Titel was more than happy to change that. For him, the work is not only a reflection of Russia’s national identity but also a portrait of the composer’s sense of self. 'It demonstrates an incredible amount of indignation and resentment but, at the same time, love. No one saw their country as Gogol and Mussorgsky did.’ Titel’s Khovanshchina was given the City of Moscow Award and won the Golden Mask for Best Opera Production at the 2016 National Theatre Awards along with Titel himself, who won the award for Best Opera Director.