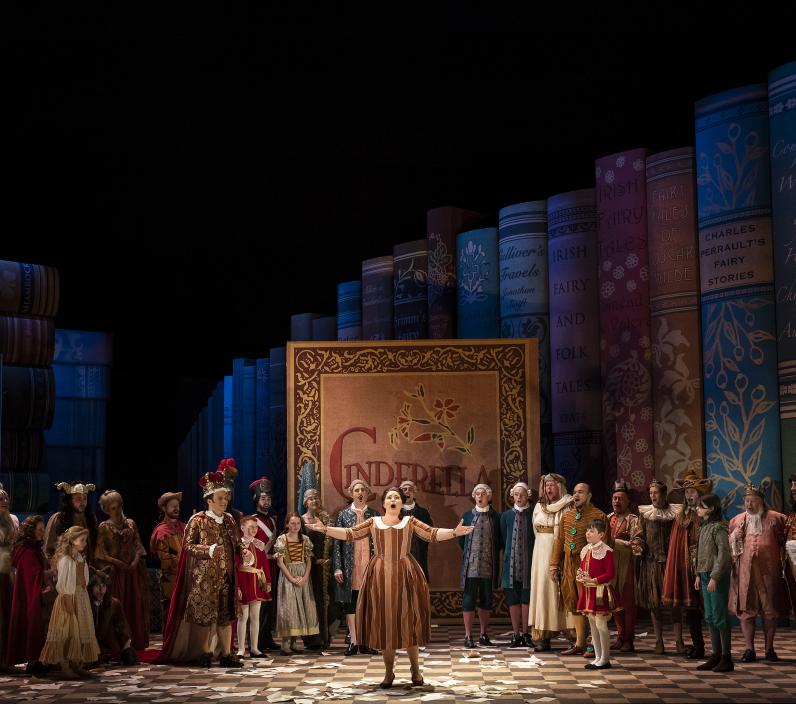 A kind-hearted young woman is forced to be a maid in her own home. Her luck seems to turn when a royal bachelor comes looking for a wife, but her stepsisters are determined to keep her in her place.

Give your New Year a fairytale start with Rossini’s La Cenerentola. Directed by Orpha Phelan, this new production from Irish National Opera unfolds from the pages of a book in celebration of literature, fantasy and the triumph of good over evil. Tara Erraught stars as Angelina alongside Andrew Owens as her Prince Charming.

La Cenerentola is presented in partnership with the Bord Gáis Energy Theatre. Irish National Opera is funded by the Arts Council of Ireland.

Act II. Cenerentola (Tara Erraught) has married Prince Ramiro after he agreed to forgive her family for their failings and allow goodness to be triumphant. She embraces her step-father and step-sisters, who are eventually won over by her magnanimity. All comment that although she is worthy of the throne, Cenerentola has risen above it. In her goodness and kindness, all find redemption. Conducted by Fergus Sheil and directed by Orpha Phelan.

Act II. Don Ramiro (Andrew Owens), who has been disguised as his own valet, has been given a bracelet by Cenerentola. Now that he has found someone who loves him for who he truly is, he is ready to dress as a prince again and find the girl with the bracelet, convinced that love with guide him to her. Conducted by Fergus Sheil and directed by Orpha Phelan.

'No no non ve', 'Una volta cera un re' & 'O figlia amabili di Don Magnifico'. Act I. In their run-down home, sisters Clorinda (Rachel Croash) and Tisbe (Niamh O'Sullivan) are perfecting their party pieces. Cenerentola (Tara Erraught) sings a little song and gets on her stepsisters’ nerves. Disguised as a beggar, Alidoro (David Oštrek), the tutor of Prince Ramiro, pays the girls a visit. Conducted by Fergus Sheil and directed by Orpha Phelan.

'I think the audience can have fun looking through right to the back of stage seeing if they can find their favorite book title' explains Nicky Shaws, set & costume designer of La Cenerentola at Irish National Opera.

In their run-down home, sisters Clorinda and Tisbe are perfecting their party pieces. Cenerentola sings a little song and gets on her stepsisters’ nerves. Disguised as a beggar, Alidoro, the tutor of Prince Ramiro, pays the girls a visit. Clorinda and Tisbe are disgusted by his rags but Cenerentola shows her kindness by offering him some breakfast.

Courtiers bring the good news that their prince is to hold a ball, with the aim of finding himself a bride. Clorinda and Tisbe are so excited that they inadvertently wake up their father, Don Magnifico. He hopes that with the prince’s ball he has at last found a solution to his financial worries.

Prince Ramiro wants to understand the hearts of the women around him and thinks he will get truer readings if he disguises himself as his valet, Dandini. When he bumps into a girl in rags, the two are struck by each other. Soon yet another person arrives in disguise. This time it’s Dandini, dressed as the prince, who patently enjoys the attention lavished upon him by Clorinda, Tisbe and their father.

As the two sisters head off to the ball, Cenerentola begs her father to allow her to go too but he refuses. When Alidoro interrogates him as to the whereabouts of his third daughter, he replies that she is dead. But after everyone has left, Alidoro reassures Cenerentola that she will indeed go to the ball and provides her with a gown, jewellery and a carriage.

Dandini wants to get to know the girls better on behalf of Prince Ramiro, so he needs to keep their father out of the way. He devises a new role for Magnifico – chief sommelier. Magnifico is thrilled that his fortunes are changing for the better. When he leaves to inspect the wine cellars, the girls are shameless in their pursuit of the ‘prince’. Dandini escapes, but not before promising them both separately that they have each captured his heart.

Dandini spills the beans to Ramiro – Clorinda and Tisbe are vacuous and vain. He then explains to the girls that he cannot marry both of them, so he will simply marry one and offer the other to his valet. They are blind to the fact that they are insulting the real prince when they announce that they feel sick at the thought of marrying someone as common as a valet.

Alidoro brings news of a new, unknown, veiled guest. The girls are terrified at the thought of a rival. Everyone is stunned when Cenerentola removes her veil; though in much finery, she is so similar to the girl seen in rags earlier! Cenerentola challenges anyone who wishes to have her as a bride to offer her respect, love and kindness instead of riches. Ramiro feels a sense of hope again.

Magnifico, having already sampled far too much wine, brushes the family’s concerns aside. After all, he left Cenerentola at home by the ashes where she belongs. Nonetheless, with such tension in the air, everyone feels a sense of trepidation as they all go off to dine.

Magnifico makes his financial situation clear to Clorinda and Tisbe. He becomes enamoured with the idea of power and wealth as he imagines one of them ascending to the throne.

Ramiro is very taken with the unknown girl, who reminds him so much of the unfortunate creature he met earlier. Cenerentola makes her feelings for the ‘prince’ Dandini very clear: she is sorry, but she simply loves his ‘valet’. Ramiro is naturally delighted to hear this, and is ready to tie the knot. But Cenerentola tells him that he must first get to know her properly. Before slipping away quietly, she gives him a bracelet, and explains that he will know he has met the right girl when he finds someone with a matching bracelet on her wrist.

Ramiro, now that he has found someone who loves him for who he truly is, is ready to dress as a prince again and find the girl with the bracelet. Dandini reveals to Magnifico that he is in fact only a penniless and powerless valet. The unfortunate father, with his financial ruin as real as ever, vows that he will have an explanation from the real prince.

Back at Magnifico’s house, Cenerentola is humming a song when Magnifico and his daughters return in a fury. They are deeply suspicious of Cenerentola, but she appears to have been at home all night.

With the onset of a violent storm, Ramiro and his retinue seek shelter in the home of Magnifico. Magnifico’s hopes are raised once more when he realises the identity of the real prince, but it’s not long before Ramiro recognises the bracelet on Cenerentola’s wrist. Cenerentola is equally surprised to find that the man she loves is in fact a prince.

In one last attempt to claw their way to power, Cenerentola’s family orders her to leave forever. But the prince reminds them of their own words – he is after all too ‘common’ for them – and he asks Cenerentola to be his bride. She accepts his proposal, but requests that he forgive her family for their failings and that he allow goodness to be triumphant.

Still proud, and rather injured, Magnifico and his daughters lick their wounds. They are eventually won over by Cenerentola’s magnanimity. All comment that although she is worthy of the throne, Cenerentola has risen above it. In her goodness and kindness, all find redemption. And Magnifico will be rich!

‘It’s not fair!’ How many times a day do parents hear this protestation? We are all born with an innate sense of justice. But rather than growing with maturity, it often diminishes in adulthood, as we seek to better ourselves and survive in the world, sometimes at the expense of others. With their innocence of life’s tribulations and necessities, children the world over find this notion of right and wrong of paramount importance, and it is surely key to the enduring appeal of the Cinderella story.

Cinderella, Cendrillon, The Glass Slipper, Aschenputtel – the story dates from as early as 7BC, in the tale of a Greek slave girl who married the King of Egypt. Other versions come from Italy and France in the 17th century and the well-known German tale from the Brothers Grimm dates from 1812. The story can be found in different guises across other continents too, from Arabia to China. And of course we have our own version in Irish folklore, Fair, Brown and Trembling. This enduring, borderless story resonates as much today as in times gone by.

You probably have your own preferred version of the tale, depending on where you grew up and which edition was read to you as a child. The Ladybird book from the 1960s was one of my own dearest possessions. I regularly escaped into the fantasy of that brutal world and celebrated the liberation and justice at the end.

The plot, with its relentless drive towards the inevitable outcome, is fast-paced, comic (and sometimes almost ludicrous), and it is served well by the virtuosic, exuberant and effervescent elements of the bel canto opera style of the early 19th century. At the same time, Rossini’s orchestration, use of form and simple harmony all provide the perfect bedrock for a deep, life-affirming message. Harmony within home life and the resolution of life’s tribulations are achievable through the qualities of humility and kindness.

I think you will find something uniquely dark, yet sparkling in Rossini’s La Cenerentola. The details will likely be quite different from the tale you grew up with. For me, the most interesting difference is not the fact that in place of the wicked stepmother we have a mean stepfather in the form of Don Magnifico (who will do anything for his two daughters – how many among us can identify more with him than with his goodly stepdaughter?). Neither is it so important that in place of the Fairy Godmother we meet the prince’s tutor, Alidoro, nor that instead of the glass slipper we have a pair of bracelets which are not at all magical.

No. The most exciting thing about this 1817 version of the classical story is that it feels curiously contemporary. This is not a story about a boy saving a girl. In fact, it is the girl who saves the boy – and everyone else. This Cenerentola is not interested in wealth or revenge or power. As she ascends to the throne, she makes the decision to rise above it – voglio starvi maggior del trono – showing us all that charity and kindness can be more powerful than status. Perhaps this is why the opera was subtitled La bontà in trionfo – Goodness Triumphant.

This article first appeared in the programme book for La Cenerentola published by Irish National Opera in November 2019.