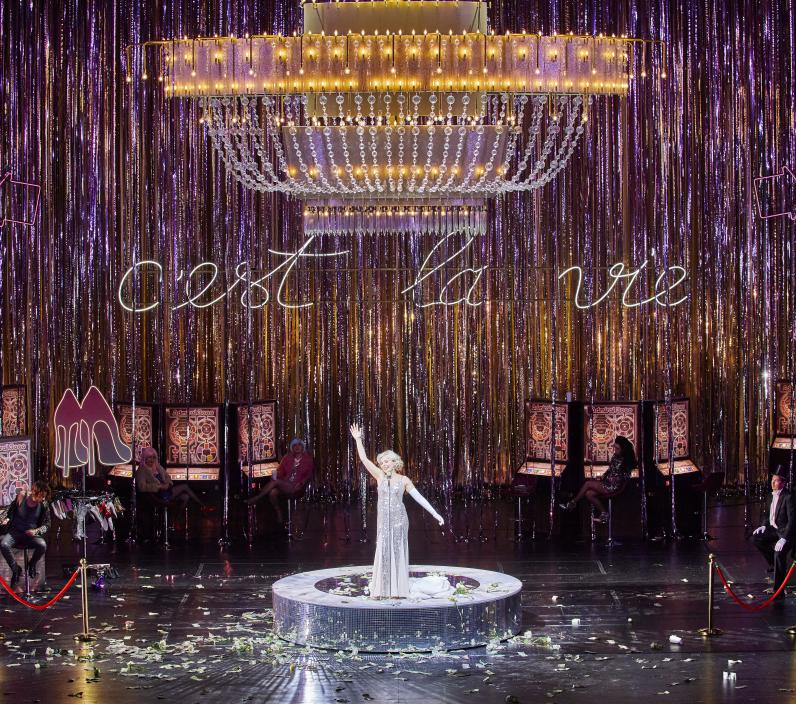 On her way to the convent, a joy-loving young woman falls head over heels in love with a handsome stranger and decides to flee with him. Yet aspiring to a life of wealth and luxury, she ends up throwing herself into the arms of a rich nobleman. But can she forget her true love?

At the Hamburg State Opera (Staatsoper Hamburg), Director David Bösch has turned a current challenge posed by Covid-restrictions into an artistic quality of Manon: due to the strict regulations on distance, the chorus members are located in the boxes of the opera house, resulting in a chamber play of sorts on the main stage. Learn more details about the Manon in the video introduction with David Bösch and production dramaturg Detlef Giese.

Behind the scenes of Manon

The creation of an opera is a fascinating process rarely visible to the public. Lucky for us, Staatsoper Hamburg kept the cameras rolling during the rehearsals of Manon to show how the singers, orchestra and director work together to bring a Massenet's masterpiece to life.

Act I
A provincial inn. There is nothing to eat or drink. Guillot, de Brétigny and the three young ladies Poussette, Javotte and Rosette call for the innkeeper – who only serves them after several exhortations. Everyone eagerly awaits the arrival of a coachful of travellers. Lescaut too has come to pick up his cousin Manon, whom he has never met, and to escort her to a convent. When she appears, a girl of fifteen, he is blinded by her beauty and charm. Manon chatters excitedly about her journey, the first she has undertaken. Lescaut goes to play cards with two companions. While Manon is alone, the wealthy Guillot approaches her with an unmistakable offer: he offers her his carriage for them to leave together. Lescaut, once returned, impresses upon Manon that she is to rebuke any such advances – he himself is watching over their family honour and will not permit anything of the kind. Then he goes back to his card game. Manon sees all her hopes for a life in freedom and self-determination dwindle, along with her dreams of glamour and happiness. This all changes when the Chevalier Des Grieux appears – this is the much-vaunted ‘love at first sight’. Overwhelmed by their mutual attraction, they spontaneously decide to escape to Paris, where – so they think – a life in happiness awaits them. Before Lescaut returns, they disappear in the coach provided by Guillot. Lescaut searches for his cousin. He accuses Guillot of having abducted her, and demands her immediate release. Guillot, in turn, feels betrayed – during the ensuing melee, he is injured. The three ladies and de Brétigny make fun of him, and Guillot swears revenge.

Act II
A small living-room in Paris. Manon and Des Grieux have been living here for some time, on modest means, but full of mutual love. Des Grieux writes to his father: he tells him of the charming appearance of Manon, who has just turned sixteen, and asks for his blessing of their union. Together, the couple is re-reading the letter when an unwanted guest appears. Lescaut has found the lovers, and demands justification from Des Grieux. Lescaut pushes him, while de Brétigny, who has accompanied him, de-escalates – a pre-arranged set-up. De Brétigny, who adores Manon, has started a relationship with her by promising her a life in wealth and high society. Manon, who loves luxury to the point of addiction, is willing to go along, even though she truly loves Des Grieux. De Brétigny tells her that Des Grieux is to be abducted that night on his father’s orders – which would leave Manon free. After Lescaut and de Brétigny have gone, Des Grieux leaves the room to post the letter. Alone, Manon remembers the beautiful hours she has had in this room with Des Grieux. Des Grieux returns to find his lover deep in dark thoughts. He describes a paradisiacal dream world in which they might find perfect bliss. Again, a caller arrives. Des Grieux wants to see who it is, but Manon stops him. When he insists on stepping outside, he is abducted. Manon mourns their parting.

Act III, Scene 1
A glittering hall illuminated by bright lights. Salespeople praise their wares; Lescaut and Poussette, Javotte and Rosette give in to the temptations of purchases and amusement. Manon, who arrives with de Brétigny at her side, causes a stir. She acts like a ‘star’, singing the praises of youth and beauty. Des Grieux’s father, a status-conscious count, is also attending the fair. He tells de Brétigny and later also Manon of the fate of his son, who has decided to devote his life to the church, the better to forget the old, painful love stories. Manon, however, longs to return to Des Grieux.

Act III, Scene 2
A chapel at the church of St. Sulpice. Thanks to his talent as an orator, Des Grieux is highly popular with the ladies who listen to him preach. He has exchanged the title of Chevalier for that of Abbé, which his father approves of, yet still urges him to think about marrying a good girl and starting a family. Des Grieux, however, still carries Manon’s image in his heart, which he cannot forget, hard as he may try. He sinks into silent meditation. Manon herself appears, praying that her relationship with Des Grieux might be rekindled. She urges him to return to her, reminding him of love and its allures. Having initially hesitated, Des Grieux gives in: the couple confesses its love once again and reunites. Together, they escape from St. Sulpice.

Act IV
At the Hotel Transylvania, the gamblers meet. Fortune favours first one, then the other; only the card-sharps always win. Manon and Des Grieux, now completely destitute, want to try their luck at roulette. Guillot offers them a game of life and death. Manon accepts and soon falls completely under the spell of the game. Guillot accuses Des Grieux of having betrayed him; the latter seeks a confrontation. The police have surrounded the hall, and no one can escape. The count, Des Grieux’s father, has arranged for a mock arrest of his son, while Manon is to be punished for real.

Act V
Somewhere in the middle of nowhere. Desperate, Des Grieux wants to share Manon’s fate. Lescaut is equally desperate, since his life has lost all meaning. One last time, Manon and Des Grieux meet. They remember their former happiness and choose death together. Their fate is complete.

5 things to know about Manon

1° A whiff of scandal

As the leading French composer of the Third Republic, Jules Massenet achieved global success with his opera Manon in Paris in 1884. Some 150 years earlier, in 1731, Abbé Prévost’s novel ‘La véritable historie du Chevalier Des Grieux et de Manon Lescaut’ (The true story of the Chevalier Des Grieux and Manon Lescaut) had been published for the first time surrounded by a whiff of scandal. It was widely read by his contemporaries and even more so by posterity.

Manon tells the poignant story of Manon and the Chevalier Des Grieux, whose love is forced to find circuitous paths. When they finally reunite in each other's arms at the end, it is too late - Manon dies in the arms of the Chevalier.

Massenet was a master in creating various moods and Manon’s libretto enabled him to incorporate a wide range of scenes that his audience relished. The church scene in Saint-Sulpice with its solemn tone sharply contrasts with the ensuing gambling scene, while the intimacy of Manon's flat in Act II makes way to the lively sales scene at the beginning of Act III.

This variety of tone is mirrored in the six different spaces that set designer Patrick Bannwart created for Manon’s six distinct tableaux. The contrasts that are inherent in the work itself are intensified. Convinced that the spaces in which the various episodes of the story take place should be as rich and sensual as life itself, stage director David Bösch’s aim is to convey Manon's thirst for experience to the audience: the departure on an adventure, the intoxication of a party, but also silence and loneliness.

From her very first appearance, whose initial shyness very soon gives way to pure joie de vivre, and later to thoughtful seriousness, Manon captivates the audience, both those on stage and those in the auditorium. In the course of the action, this Manon changes - she becomes a lover, a ‘glamour girl’ and a player taking the greatest risks. At the end we see her in sad, oppressive loneliness on the brink of death.

Manon has many faces, some of which are real and some that are mere masks, turning her into a mysterious being, a ‘sphinx’ and ‘siren’, as Des Grieux sings about her in Act IV. Without a doubt, Massenet looked deep into the soul of his protagonist and portrayed her with the utmost psychological sensitivity, so that she stands before us most vividly.

For director David Bösch, it is apparent that modernity takes on an essential role. In his production, young people of today (even if this present cannot be clearly defined), with their own realities, appear as protagonists in this almost 300-year-old story. They embody a living present and contribute their ways of thinking and acting, giving the audience the impression of being very close to them.

What is decisive here, according to Bösch, is the authenticity and credibility of the emotions, which he depicts with almost naturalistic precision. Instead of focusing on the realism of the sets and costumes, which would only be a distraction, Bösch is faithful to the reality of sentiment.

Whoever watches Bösch's production will immediately notice that the soloists appear alone on stage. The choristers do not. Given the production's time of origin (late 2020 / early 2021), this hardly needs justification, but an underlying conceptual idea is also at work. Manon undoubtedly also lives from the large tableaux in the first and third acts.

However, if the emphasis is not placed on the grand set design, but rather on the actions and the inner tension of the protagonists, this opens up the possibility of illuminating them with greater clarity. The production aims to move beyond a simple ‘boy meets girl’ story. Instead, life and love itself are celebrated, even if ultimately a freely chosen death awaits our heroine.