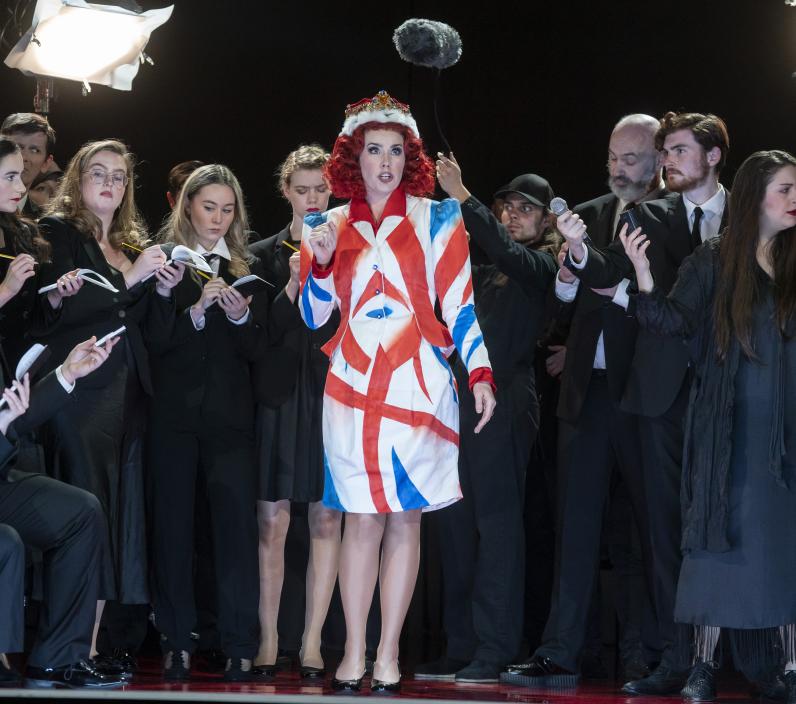 Two Queens. One Catholic and Scottish, one Protestant and English. One in prison at the other’s behest. A man between them balancing loyalty and love. A cry of ‘Vile bastard’ is the impassioned insult that leads one to the scaffold.

The insult was so potent that the first performance of Donizetti’s lyrical tragedy was cancelled at the last minute in Naples through royal intervention. A toned-down revision went awry at la Scala the following year when the great Maria Malibran chose to sing the original words. More than a century would pass before Maria Stuarda would finally make its way into the operatic mainstream. For the central female roles, Irish National Opera has called on two Irish singers with glittering international careers: mezzo-soprano, Tara Erraught and soprano, Anna Devin. Tom Creed’s new production promises timely insights into what happens when larger imperial states encroach on their smaller neighbours and when geopolitics is clouded by emotions.

Two Queens and only one head will roll.

Behind the scenes of Maria Stuarda

Gaetano Donizetti's opera Maria Stuarda takes us to the heart of one of the great conflicts of the Tudor era: the rivalry between Queen Elisabeth I of England and Mary Stuart. High-level political intrigue merges with jealousy and amorous rivalry. The result: one of the most famous confrontations in history.

Everyone waits at the court of Queen Elizabeth I for a big decision. It is rumoured that she will agree to marry the heir to the throne of France and unite the two nations, which would create a major political and economic power. She is still doubtful about this, though she says she is willing for the sake of her people and country. But in reality she harbours feelings for Robert Dudley, the Earl of Leicester, and their ambiguous relationship has been the talk of the court for many years. Mary Stuart, Queen of Scots, is under a kind of house arrest in England, suspected of conspiring to murder her late husband and plotting to assassinate Elizabeth. George Talbot, Earl of Shrewsbury, who has been charged with guarding Mary, pleads for mercy, while William Cecil, her chief adviser, recommends her execution without delay. Leicester is not at court for Elizabeth’s announcement, and she wonders why he is not there. When he appears, she gives him a ring to take to France as a token of her provisional willingness to marry, but with the caveat that she can change her mind at any time. Talbot has sent for Leicester, and when they are alone, he passes on a portrait of Mary in her captivity along with a message in which she seeks a meeting with Elizabeth, after which Leicester resolves to set Mary free. When Elizabeth returns, she senses his agitation and demands to see Mary’s message. In spite of her jealousy of Mary and Leicester’s seeming affection for each other, she agrees to visit Mary. Mary and her companion Anna have been allowed to enjoy the freedom of the open air at Fotheringhay Castle, where she has been imprisoned. She is reminded of happier times during her childhood and teenage years in France. Distant hunting horns and the voices of men in the distance announce the approach of Elizabeth, and now Mary is having second thoughts. Leicester arrives and explains that the hunting party is a pretext for the meeting, and advises Mary to be submissive towards Elizabeth. When the queens meet for the first time, Elizabeth is instantly enraged by Mary’s haughtiness, and Mary can read that fury clearly on Elizabeth’s face. Mary swallows her pride and behaves deferentially towards Elizabeth, who responds by humiliating her in front of her advisors and especially Leicester. Mary can only keep silent and withstand this offence for a while, before insulting Elizabeth and sealing her fate.

Elizabeth struggles with the idea of signing Mary’s death sentence, but Cecil convinces her. Leicester arrives just as she signs, and continues to plead for Mary’s life, but in vain, and Elizabeth orders him to be there to witness the execution. Mary bemoans her misfortune and fears for Leicester. Talbot enters with Cecil, who presents the death warrant and insensitively offers the services of a Protestant minister to the Catholic Mary. Talbot tells her about Elizabeth’s decree that Leicester will have to watch her execution. Haunted by ghosts of her past, she is assailed with memories of violence and deaths from her turbulent life. Talbot urges her to clear her conscience and admit her crimes, and she unloads her burden of guilt as she prepares to die. Mary’s supporters wait to see her one last time at the place of execution, bemoaning the shame that the death of a queen will bring down on England. Mary greets them, presents Anna with a handkerchief to blindfold her before her execution, and invites the assembled crowd to join her in prayer. When offered her last requests by Cecil, Mary asks that Anna can join her on the scaffold, and offers her forgiveness to the one who insulted and condemned her. Leicester arrives and Mary tries to calm him, but he can do nothing to prevent her fate. Mary goes to her death as her supporters continue to proclaim her innocence.

Writers have always adjusted history to their own ends. Donizetti’s 1835 opera takes this approach, as did the German playwright Friedrich Schiller, whose 1800 play Mary Stuart formed the basis for Donizetti’s treatment of the story.

Among the facts, there is already much speculation. We know that Mary ascended to the Scottish throne aged six days, on the death of her father James V in 1548. She spent her youth in France, betrothed and then married to the future king of France, becoming queen consort briefly in 1559, until his untimely death in 1560. She then returned to Scotland into the middle of a conflict between her own Catholic community and the rapidly expanding Protestant ascendancy. She married her half-cousin Henry Stuart, Lord Darnley, in 1565, and had a son, James, in 1566.

In 1567, Darnley’s castle was blown up, he was found murdered in the garden, and the chief suspect, the Earl of Bothwell, quickly became Mary’s third husband. Following an uprising against the couple, Mary abdicated the throne in favour of her one-year-old son and fled to England to seek protection from her cousin, Queen Elizabeth I, but was imprisoned for the next 18 years. Letters and love poems addressed to Bothwell were allegedly found in a casket and formed the basis of the accusations against her.

Like her 20th-century namesake, Elizabeth I became queen aged 25, and was widely respected in England throughout her long reign. She never married, but there were long-running rumours about her will-they-won’t-they relationship with her so-called favourite, Robert Dudley, Earl of Leicester. At one point, she proposed that Leicester would marry Mary, to improve relations between England and Scotland, and that all three would live together at Elizabeth’s court, but this never came to pass. When, after 18 years, Leicester finally married someone else, his new wife was ostracised from Elizabeth’s court.

In 1586, Mary was implicated in the infamous Babington Plot, in which she appeared to approve of plans to assassinate Elizabeth and take the place of her cousin on the throne. This was the last straw, and rapidly led to Mary’s conviction and execution. These events form the backdrop to the opera, as different factions at Elizabeth’s court compete to secure Mary’s freedom or death.

What’s the truth? Historians are divided about Mary’s role in the various plots. We’ll never know the intimate details of Elizabeth’s relationship with Leicester. But what we do know is that Donizetti, and Schiller before him, created a thrilling and urgent meditation on power, pride and politics by filling in the gaps.

Crucially, Donizetti developed the relationship between Elizabeth and Leicester into a full-blown love triangle in which Leicester’s infatuation with both women is a key driver of the plot. And, most importantly, the famous confrontation between the two queens, and the ensuing consequences, were invented for dramatic effect. How better to tell the story of their rivalry than having them meet on stage?

All this gives licence to a new production of the opera to continue to speculate. What if the events depicted were unfolding now rather than four centuries ago? How might we map the historical events onto the current state of affairs between England and Scotland? What might we learn from current news about larger imperial states encroaching on their smaller neighbours, where geopolitics are clouded by emotional whims?