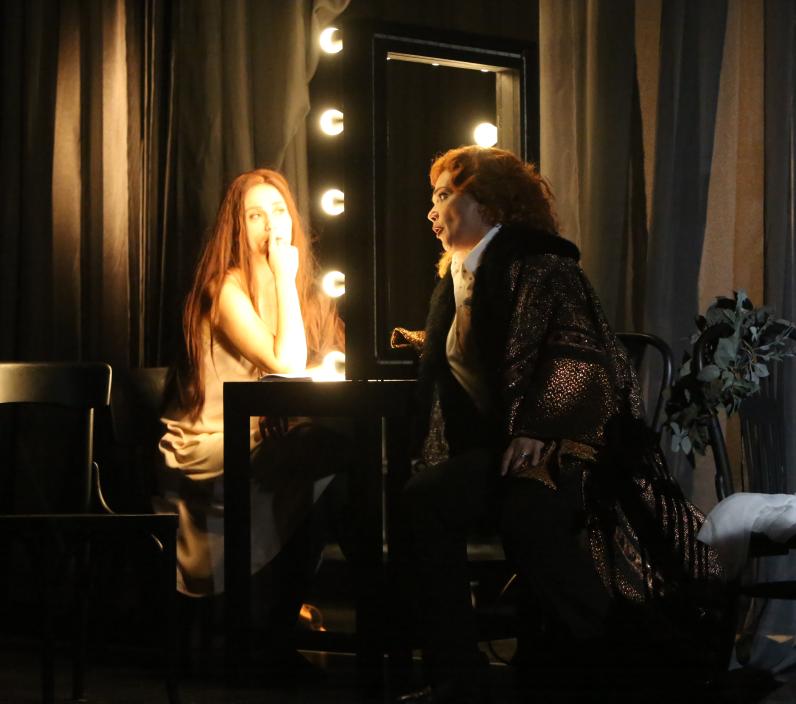 Menotti
This performance is no longer viewable as video-on-demand for rights reasons but other material about the production is still available.
Sung in
English
Subtitles in
English

With the help of her daughter and a mute servant, phony psychic Madame Flora uses her clients' grief to deceive them. But one night, an uncanny encounter leads to murder and madness.

Croatian National Theatre Zagreb’s production of The Medium offers enough suspense to rival any thriller in just one hour. Gian Carlo Menotti's musically eclectic English-language opera mixes Italian verismo with musical-like American modernity, as one might expect from a thoroughly American-Italian composer and man of theatre.

Copyright
Mara Bratoš
Behind the scenes

Introduction to The Medium

With the help of her daughter and a mute servant, phony psychic Madame Flora uses her clients' grief to deceive them. But one night, an uncanny encounter leads to murder and madness.

The medium’s parlour. Monica, Madame Flora’s daughter, and Toby, a mute servant boy rescued from the streets of Budapest play dress-up. When Madame Flora, or Baba as they call her, arrives home drunk, she violently chastises them for not preparing for that night’s seance. Soon the clients arrive, Mr. and Mrs. Gobineau, regulars, and the widow Mrs. Nolan who is  attending for the first time. With Madame Flora in a trance in her chair, a fake seance is held where Mrs. Nolan speaks with what she thinks is her deceased  sixteen-year-old daughter but is really Monica behind a screen. As Monica disappears, Mrs. Nolan rushes toward the figure and is restrained by the Gobineaus. When order is restored, Mr. and Mrs. Gobineau communicate with  their deceased two-year-old son Mickey, who, having never learned to speak, only laughs. After they say goodbye to him, Madame Flora suddenly, with a loud gasp clutches at her throat with both hands. She feels a phantom  hand clutching her throat and is terror-stricken. After demanding the guests to leave, she calls for Monica and tells her what she felt, eventually blaming Toby who was in the other room the whole time. In an effort to calm Baba’s drunken rage toward Toby, Monica sings her the dark lullaby ‘The Black Swan’, interrupted by a voice that Baba hears causing her to fly into a terrified rage at Toby for not telling her where the voice is coming from. The act ends with Monica again singing the lullaby while Baba recites her Hail Marys.

A few days later. Toby is giving a puppet show for Monica. Their mutual love becomes more obvious. When Baba comes home, she resumes her accusations on Toby, sure that he knows what went on that night. The clients again arrive, expecting another seance but are driven away by Madame Flora who tries to convince them that the whole thing was a sham by revealing all the tricks that she and Monica used. But the clients are not convinced and leave claiming that she might have thought she was cheating them, she in fact was not. Once the guests are gone, she drives Toby out despite Monica’s pleas on his behalf. With everyone gone, and Monica in her room, Baba pours herself another drink and questions her own sanity, becoming wild with drink and eventually passing out. Once she has fallen asleep, Toby sneaks back in and tries to get into Monica’s room, but finds it locked and eventually goes to the trunk to find his tambourine. While searching, he knocks the lid of the trunk down, waking Baba. Toby quickly hides in the puppet theater. As Baba tries to see where the noise came from and fetches a revolver from a drawer  in the table. Hysterically she shouts out: ‘Who is it? Speak or I’ll Shoot!’ and the  puppet theater curtain moves. Baba screams and fires at it several times. As Toby’s bloody body collapses grasping the curtain, Baba says: I’ve killed the ghost! I’ve killed the ghost!’ Monica, hearing the gunshots, enters, sees Toby’s  lifeless body and runs for help. As the final curtain falls very slowly Baba asks, in a hoarse whisper: ‘Was it you?’

Josip Šego, conductor: The Medium by Gian Carlo Menotti is an opera with which I have a special relationship. Menotti was inspired to write the libretto in 1936 after attending a spiritual séance ten years earlier. He was drawn to the supernatural, how others respond to it and the beliefs that come with it. This experience became the foundation of the story; the tension between a real and imaginary world in which the characters live.

In a perfect blend of Italian verismo and modern American music, all characters and their relationships are musically nuanced and perfectly balanced. On one hand, we hear Monica's arias, simple, memorable and melodious, airily orchestrated, with catchy numbers like ‘The Black Swan’ (which ends in a duet with Flora) and ‘Monica’s Waltz’. On the other hand, we witness a character sinking into madness, caught between real and an made-up world. Flora’s performances are characterised by chromatics, harsh harmonies, unexpected rhythms, sudden changes in instrumentation and especially in the second act, sudden accents and the climax of the orchestra. The instrumental preludes add to the atmosphere and drama. The expressiveness comes in compact form: a chamber orchestra, of string quintet, wind sextet, piano and percussion, which is typical orchestration for many 20th century chamber works written by the likes of Britten, Stravinsky, Hindemith and Holst.

I had the opportunity to work on The Medium first as a student at Zagreb Academy of Music. This performance allowed me a taste of the full cycle of a production, from first rehearsals to the final stage performance. I witnessed for the first time the endless possibilities and power of expression when a voice and an instrumental ensemble combine. I learned how to connect music with libretto and stage drama. The Medium was a formative experience that destined me to keep exploring opera. I have conducted The Medium several times since then, always with great joy and enthusiasm, just as if it were the first time.

Caterina Panti Liberovici, director: Where is the boundary between what we call real and our inexplicable inner perceptions? The Medium is a deeply intriguing, multi-layered opera. The two acts have a similar sequence, though in the first everything seems familiar and realistic, in the second the storylines seem to be distorted. Menotti was a master of leitmotifs to serve his story. The synopsis encourages us to explore our own stories. The key towards decrypting this opera is accepting the unknown and facing unanswered questions. Our medium Flora’s journey begins with a safe environment as she controls reality and appears in command (or at least in touch) with the afterlife. She is almost like a businesswoman playing a medium. Her employees have a significant role in this venture: Monica is an actress, acting as a ghost during these sessions, and Toby acts as the set designer. The boundaries of Flora’s world are defined. The emotional commitment of the clients present at the séance underline Flora’s dominant position; their confidence in the unseen transcends the boundary between logic and emotions. But during one séance, Flora suddenly feels an invisible hand touching her neck. This shatters her world and sends her on an irreversible downward spiral. As her self-confidence begins to waver, Flora is confronted with her own insecurities with threats on two fronts: one the struggle to keep the established order and the other the growing gap between dreams and reality. What was previously a clear separation between true and false becomes a hiatus full of doubt, introspective research and unanswered questions. Flora has to be careful not to be swallowed up in this gap. Elements of her reality collapse, becoming part of a hallucinatory blur. Monica, Toby, guests, even the surrounding area turn into hostile projections; the personification of Flora’s fragmented identity.