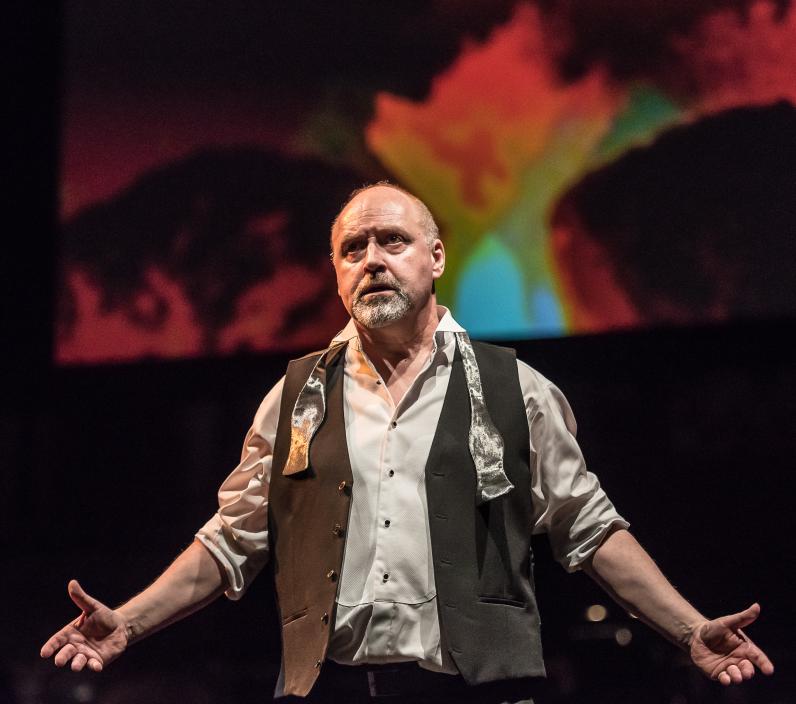 Do you believe that love could set you free, even if it means that you would lose a part of yourself?

Years have passed since Wotan kissed Brünnhilde to sleep on the mountain. Sieglinde died giving birth to Siegfried, and the orphan boy has grown up in the care of Mime, Alberich’s brother.

Mime nurtures a plot to raise the strong boy to kill the giant Fafner, who has used the magic helmet to transform himself into a dragon, the better to guard his golden treasure. But all Mime’s expertise cannot forge the shattered fragments of the sword, which were Sieglinde’s only bequest. The headstrong Siegfried frightens Mime, who in vain seeks his gratitude for his upbringing. Gradually Siegfried extracts from Mime the story of his birth and death of his mother, making him all the more determined to escape from his despised foster parent.

Mime’s despair is interrupted by the unwelcome arrival of a strange Wanderer, who challenges him to a game of knowledge.  Mime makes the mistake of asking questions of which he already knows the answer: who inhabits the earth and the lower and upper worlds. The Wanderer in turn asks Mime the questions for which he needs to find answers: who were Siegfried’s parents; what is the name of the shattered sword; and especially who will forge it anew.  Mime cannot answer the last, and his head is ‘forfeit to him who has not learned fear’.

The Wanderer, who is Wotan in disguise, leaves Mime a helpless wreck for the returning Siegfried, into whom Mime vainly tries to instil the meaning of fear. Siegfried determines to break free by forging the sword himself. He defies his inexperience, heats the furnace, and succeeds in welding the fragments of the sword (‘Notung, Notung, neidliches Schwert’), while Mime brews a poisonous drink which he hopes will secure him the longed-for prize.

Outside Fafner’s lair deep in the forest, Alberich broods, awaiting his moment. He is joined by the Wanderer, revealed as his arch-rival Wotan, who assures him that he is only there to observe, not to intervene in the outcome. They fail to alert Fafner to his impending danger, and withdraw when Siegfried arrives on his quest with Mime.

Once he has found the place and ascertained that a dragon too has a heart in the usual place, Siegfried sends Mime away, and enjoys the sounds of nature around him (‘Forest murmurs’). He muses about his lost parents. His horn calls arouse the sleeping dragon. The fearless Siegfried plunges his sword into the beast’s heart, whereupon it transforms back into a sorrowful Fafner, who recognises his victor. The dragon’s blood has brought Siegfried understanding of the sounds of the forest and, forewarned by a bird that all he needs are the ring and the helmet, he enters Fafner’s cave.

Both Alberich and Mime have been eavesdropping.  Now, with the prize so close, they squabble about who should claim it. They hide when Siegfried re-emerges, to their surprise with only the helmet and ring. The forest bird now warns Siegfried that he should not trust Mime’s intentions. So, when Mime offers his refreshing but poisonous drink, Siegfried sees through his ruse and despatches his unloved mentor without remorse. The bird tells him that his next task is to rescue Brünnhilde, and the hero joyfully sets off on his quest.

Wotan summons the earth-mother Erda from her deep sleep to consult her about the future (‘Wache Wala’). But her wisdom belongs to the past, and he rejects it. He foresees a world which will belong to a new generation, free from his guilt.

Before Wotan yields power, he must set up one final confrontation. He challenges Siegfried’s ascent to the mountain-top, hoping that his own role in enabling the future may be recognised. Good-humoured banter gives way to threats, until an impatient Siegfried uses his sword to break the old man’s once all-powerful spear which had once shattered his father’s sword and which now bars his path. Wotan recognises that his power has gone.

Siegfried fearlessly passes through the protective flames and reaches the summit of the world. There he discovers the sleeping Brünnhilde, and for the first time is overwhelmed by wonder and fear. He has never met a woman before. He awakens her from her long sleep with a kiss, and she greets her brave new world (‘Heil dir, Sonne’). She at first cannot grasp the transformation which has come over her, and resists his urgent wooing. Gradually, their defences break down, and Brünnhilde embraces what was always her destiny (‘Ewig war ich’). Together, they joyfully surrender to what the future will bring.

Wagner had begun the composition of the opera Siegfried’s Tod in 1848, but had slowly realised that in order to tell the fall of the hero, he needed to explain Siegfried’s youth: the mystery surrounding his conception, how the Valkyrie Brünnhilde had been punished for saving his parents against the wishes of the god Wotan, and finally how the ring had been created and caused the old world to collapse.

Taking place at the centre of the cycle, not including the prologue, Siegfried plays a very important part in the unreeling of the plot. The opera marks the point where the balance of power between gods and humans swaps. While Wotan only appears as the Wanderer and sees the ultimate symbol of his power broken in the last act, Siegfried represents the vitality and power of early humanity. Brünnhilde creates a link between those two forces when she fully accepts her mortal condition, and thus change, while Wotan prefers to withdraw, predicting the near fall of the gods.

The importance of Siegfried in the plot is expressed in the score through the omnipresence of the character, which requires from the singer to dominate the stage for the most of four hours, culminating in a straining final scene, making this one of the most testing roles of the tenor repertoire.

Composed on a period of fifteen years, the opera includes some stylistic inconsistencies. The first two acts carry on with the style initiated in Das Rheingold and Die Walküre, with one or two structural experiments. The third act, however, composed after a long period of work on Tristan and Die Meistersinger, stands out. Here Wagner makes use of new techniques: powerful vocal lines, the abandoning of recitative for arioso supported by a rich orchestral work, and dense use of motives. This advance is noticeable as soon as the prelude begins, which puts together the motifs of Wotan, the Valkyries and their ride, Erda, the Wanderer, Alberich and the Ring, and The Magic Sleep.