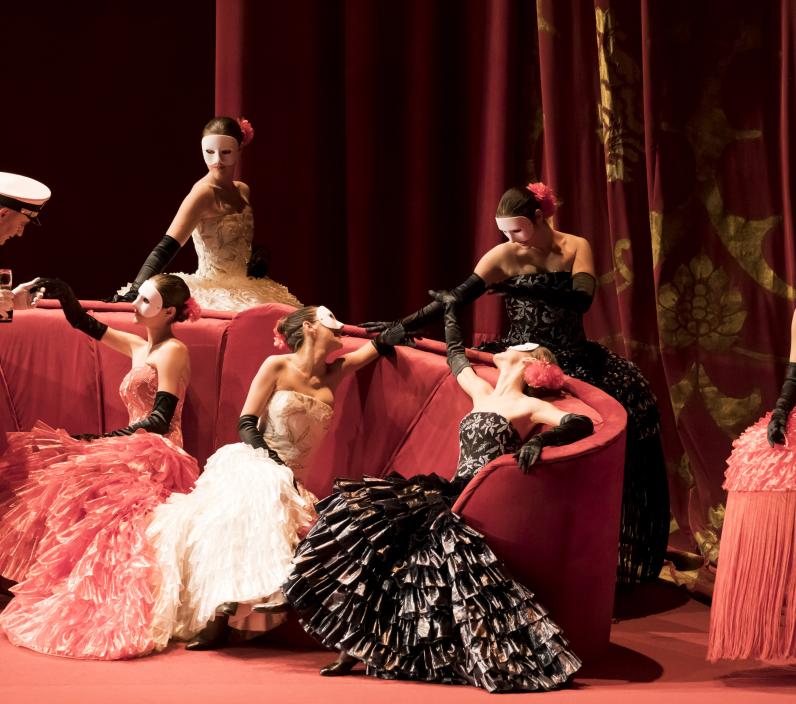 Korngold
This performance is no longer viewable as video-on-demand for rights reasons but other material about the production is still available.

Seeking revenge for her sister’s suicide, Violanta vows to have her seducer killed. As hatred turns to love, can they still escape the deadly fate she has plotted herself?

Set during the carnival in Venice, Violanta is Korngold’s second opera, composed at the tender age of 17. This production marks Violanta’s Italian premiere over a hundred years after its creation, contributing to its well-deserved rediscovery.

Violanta (Annemarie Kremer) realises that she is actually in love with Alfonso (Norman Reinhardt) – as he is with her. She hesitates to give Simone the signal to come out and kill him. Conducted by Pinchas Steinberg and directed by Pier Luigi Pizzi.

Alfonso (Norman Reinhardt) relates the story of his unfulfilling life and admits his longing for death. Conducted by Pinchas Steinberg and directed by Pier Luigi Pizzi.

'Korngold envelops this whole story with very tempestuous music. It is as if these characters were all inside a storm: they have no respite, they have no peace, obviously starting with the protagonist herself,' explains Pier Luigi Pizzi, who's in charge of the direction, the sets and the costumes of this production of Violanta at Teatro Regio Torino.

‘This music is full of colors, full of emotions, it’s incredible. It’s a miracle that a boy of 17 years old could write such a thing. In my opinion, Korngold should have gotten an Oscar just for Violanta,’ says Pinchas Steinberg, who conducts this new production of Violanta at Teatro Regio Torino.

'The role of an opera house is to offer a wide variety of repertoire and not only the most popular titles. We have 425 years of history of titles, of styles, of different musical languages, and ways of telling stories,' says Sebastian F. Schwarz, general and artistic director of Teatro Regio Torino that offers us the Italian premiere of Violanta over a hundred years after its creation.

'To young singers nowadays, I would say to always be loyal and true to yourself and to your own inner voice: let it speak through your singing voice. Be authentic and have your own personality. Don't try to look or sound like anybody else,' says the Dutch soprano Annemarie Kremer who plays the title role in Korngold’s second opera Violanta at Teatro Regio Torino.

On the night of the Carnival, Simone searches his house for his wife Violanta in vain. Ever since her sister Nerina committed suicide after being seduced by Alfonso, the Prince of Naples, Violanta has vowed to avenge her.

Simone is about to leave for the Carnival with the painter Giovanni Bracca when Violanta appears. After dismissing Bracca, she admits to Simone that she has anonymously arranged a meeting with Alfonso in their house, where she wants her husband to kill him. Initially horrified at this plan, Simone finally caves in. At Violanta’s threat that she could succumb to Alfonso’s wooing, for hate and love are feelings of the same nature, Simone swears that Alfonso will not leave the house alive. Once Alfonso will be unarmed, Violanta will sing the same Carnival song with which she had first lured him in: at that signal, Simone will enter to murder him.

Alfonso arrives. During their meeting, Violanta reveals her true identity and her intention to avenge Nerina. However, when Alfonso relates the story of his unfulfilling life and admits his longing for death, Violanta realises that she is actually in love with him – as he is with her. She hesitates to give Simone the signal to come out and kill him. Simone becomes impatient and enters, finding the lovers in embrace. As Simone is about to strike Alfonso, Violanta interposes herself, receiving the blow.

Outside, the colourful carnival hustle can be heard. Giovanni rushes into the house with a group of masks. Silence sets in as Violanta dies in Simone’s arms.

Death and the young man

The Viennese wunderkind Erich Wolfgang Korngold composed his one-act opera Violanta before his world-wide success Die tote Stadt. Hailed as ‘the greatest hope of modern German music’ by the Italian composer Giacomo Puccini and dubbed a ‘musical genius’ by none other than Gustav Mahler, who recommended that he should study with Alexander von Zemlinsky, Korngold was set for success early on. Composed at the age of 17, Korngold’s borrowing from great predecessors such as Verdi and Wagner and contemporaries such as Strauss and his teacher Zemlinksy cannot be denied. And yet, Violanta is never imitative.

Neue Zürcher Zeitung
This opera can be counted among the ‘last late-romantic masterpieces of the genre’, frenetically pulling out all the stops.

Violanta premiered as a tragic counterpart to Korngold’s first comedic opera The Ring of Polykrates in Munich in 1916, conducted by Bruno Walter. Over one hundred years after its premiere, the piece is now being rediscovered in the course of an international Korngold renaissance and staged for the very first time in Italy at Teatro Regio Torino. One cannot miss the irony that this work of youth is staged and conducted by two undisputed doyens of their trade: the renowned opera director Pier Luigi Pizzi and the equally acclaimed conductor Pinchas Steinberg.

All in all, the production exudes maturity and ripeness, almost decay. The decadent setting – a Venetian carnival – only strengthens that impression. Originally set in the Renaissance, Pizzi moved the action to the 1920s, when the work was composed. Critics unanimously applaud the transposition of ‘this sinister story of Eros and Thanatos into Jugendstil fashion that seems inspired by the Teatro Regio itself.’ (Corriere della Sera)

The action is located in a sumptuous crimson interior, which conveys the bottled-up passions of the characters. Indeed, Pizzi does not yield to the temptation of drawing a folkloristic tableau. The Renaissance man, who also designed the set and the costumes, interprets the scenery metaphysically. As the Neue Zürcher Zeitung points out: ‘On the completely red stage, framed by solid, heavy curtains, a black circle draws the eye into the depths, behind which a gondola, like a mortuary bark, carries Alfonso and the other carnivalesque figures into Violanta's house.’ The ‘enormous bay window, where the silver waters of the lagoon are reflected by an ink-black night, an omen of death’ (Crescendo magazine) is the staging’s pivotal point, from where eccentric characters might appear like specters from a distant world. While the carnival is in full swing, the staging focuses on the drama of the three characters enclosed in the symbolic circle.

The music participates in creating an atmosphere of menace and temptation. Pinchas Steinberg ‘exalts the most modern, Straussian features of Korngold's writing from the sick chromatic sumptuousness of the most dramatic and lyrical moments to a chamber-style full of ghostly chills’ (GB Opera Magazine).

GB Opera Magazine
Korngold and Steinberg fully manage to convey the authentically Venetian character, that mixture of wonder and repulsion, a decaying corpse covered in purple and gold, is the most authentic reason for charm.

Where the supposedly chaste Violanta is looking for voluptuous lust, the lust-tested Alfonso is looking for unconditional love. When their voices softly interlace in a duet at the end of the opera, the inspiration of Wagner’s Tristan and Isolde can be sensed in the blend of exhausted love and ecstatic longing for death. How could Korngold have had such insight at so young an age? Does art imitate life, or is it a foray into our psyche?