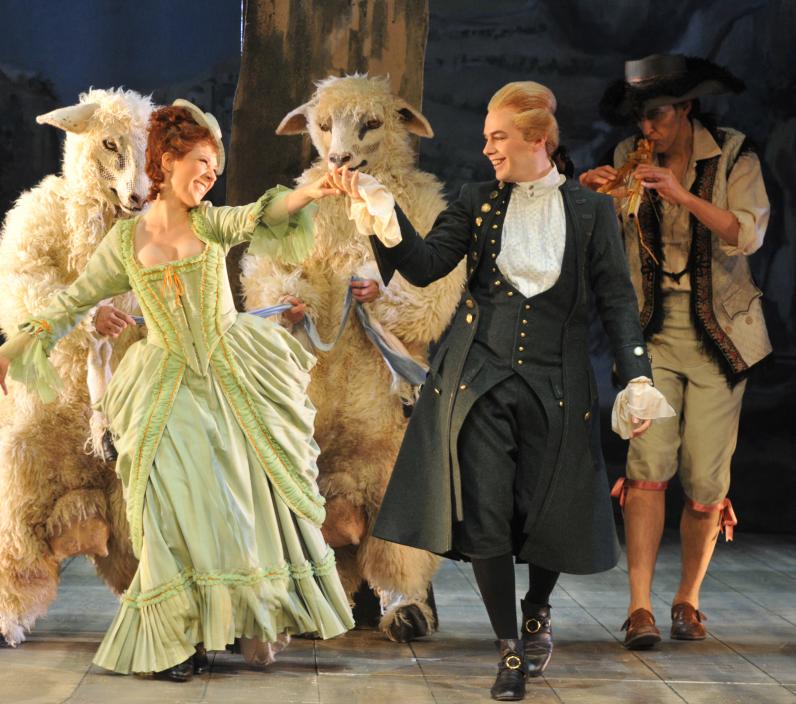 On his military campaign abroad, an eccentric king is more concerned with conquering women than land. He always gets his way, until one day he falls for his brother’s secret lover.

Xerxes’ tactics, which he changes as often as his opulent costumes, allow his opponents little time to rest. This results in a ‘baroque Muppet Show,’ as the celebrated Norwegian director Stefan Herheim describes his spectacular stage production. After a bewildering series of games of love and intrigue, Handel’s opera ends with the insight that life is a theatre in which one cannot always choose one’s own role.

King Xerxes (Valer Sabadus) admires his favourite plane tree as he rests under its beloved and sweetly treasured shade. Originally written for a castrato, ‘Ombra mai fu’ is now one of the most popular arias in the countertenor repertoire.

Disguised as a flower seller in order to deliver his master’s message, Elviro (Hagen Matzeit) makes clear his disapproval of the King’s desire to marry Romilda, a mere subject. Princess Amastre (Katarina Bradic), in her disguise as a man, hears Elviro expressing this and she is aghast at the King's plan to marry another when he promised to be hers.

Act I. Amastre, a foreign princess who was promised to marry Xerxes, has disguised herself as a soldier in his army. She watches him as he receives Ariodate (Torben Jürgens) returning victorious from a campaign. Xerxes announces that he will reward the commander by having Romilda marry a man equal in rank to the King himself. Conducted by Konrad Junghänel, directed by Stefan Herheim.

From a three-cornered hat bedecked with a golden ship to panniers with historically accurate boning and inlays, the costumes in Xerxes are a feast for the eyes - and a challenge for the costume department at Deutsche Oper am Rhein. In this behind the scenes video, Stefanie C. Salm offers a sneak peek at Atalanta's magnificent wardrobe.

Behind the scenes of Xerxes with Dirk Busse

Deutsche Oper am Rhein stage manager Dirk Busse is responsible for making sure everything on stage runs smoothly. In this behind the scenes video, watch him prepare the stage for a performance of Handel's opera Xerxes and coordinate the first scene change.

Period instruments bring a unique sound to historically informed performances of operas such as Handel's Xerxes. Kristin Linde presents the mellow sounds of the baroque oboe and Andrea Baur plays the long and rich strings of the theorbo.

King Xerxes is admiring his beloved plane tree when he is struck by Romilda’s song. She is the daughter of Ariodate, the commander of his army. The King asks his brother, Arsamene, to tell Romilda about his love for her, but he refuses to do so as Arsamene and Romilda are already in love with each other. Undeterred, Xerxes decides to woo Romilda and Arsamene warns her about the King’s intentions. Unfortunately for them, Atalanta, Romilda's sister, is also in love with Arsamene and encourages the King in his determination. Romilda opposes the advances of her new admirer. In retaliation, Xerxes decides to banish his brother.

Amastre, a foreign princess who was promised to marry Xerxes, has disguised herself as a soldier in his army. She watches him as he receives Ariodate returning victorious from a campaign. Xerxes announces that he will reward the commander by having Romilda marry a man equal in rank to the King himself. Amastre decides not to reveal who it is and swears revenge. Arsamene has his servant Elviro deliver a letter to Romilda, telling her how distressed he is at their forced separation and pledging to try to visit her in secret. Atalanta, hoping to secure Arsamene for herself, tells Romilda that Arsamene is in love with another girl, but Romilda does not believe it.

Disguised as a flower seller in order to deliver his master’s message, Elviro makes clear his disapproval of the King’s desire to marry Romilda, a mere subject. Princess Amastre, in her disguise as a man, hears Elviro expressing this and she is aghast at the King's plan to marry another when he promised to be hers. Elviro hands the letter to Atalanta, who promises to give it to Romilda. Instead, she shows it to the King, telling him that Arsamene sent it to her and no longer loves Romilda. Xerxes takes the letter and shows it to Romilda, telling her Arsamene is now in love with Atalanta, not her. Shaken at the news, Romilda nevertheless continues to reject the King's attempts at seduction. Amastre tries to commit suicide, but is stopped just in time by Elviro. The servant tells her what Atalanta told him; that is, that Romilda would now yield to the King.

Sailors hail the completion of a bridge spanning the Hellespont, constructed under Xerxes’s orders, and he orders Ariodate to cross the bridge with his army and invade Europe. The King finds his heart-broken brother and tells him to cheer up as he is free to marry Atalanta, but Arsamene insists that the woman he loves is Romilda. Hearing this, Xerxes advises Atalanta to forget about Arsamene, but she says that is impossible. Elviro witnesses a violent storm threaten to collapse the new bridge, and he calms his nerves with drink.

Xerxes again implores Romilda to marry him but she remains firm in her refusal. Amastre intervenes and draws her sword on the King. She manages to escape arrest only thanks to Romilda, who convinces the guard to release her. Amastre says Romilda should not be forced to marry a man she does not love, and Romilda praises those who are true to their hearts.

Romilda and Arsamene discover that Atalanta has plotted behind their backs to separate them. Xerxes begins to threaten Romilda, who, frightened, agrees to marry him if her father gives his consent. Arsamene bitterly reproaches her for this. When the King finds Ariodate, he once more asks him if he is happy for his daughter to marry someone equal in rank to the King. The commander thinks this means Arsamene and happily gives his consent. When Xerxes returnes to Romilda, she tells him that Arsamene loves her and in fact has already kissed her. Furious, the King orders his brother to be put to death. Amastre asks Romilda to take a letter to the King, telling her that it will help her cause, and the jilted princess bewails her plight. Romilda tries to warn Arsamene of the danger he is facing, but he blames her for his sentence.

At the temple of the sun, Ariodate waits for the bride and groom. When Romilda and Arsamene arrive, he hastens them so that the wedding can be celebrated immediately. Xerxes enters, ready to marry Romilda, and is enraged when he discovers that it is too late, as Ariodate has already married his daughter to Arsamene. The King denounces his commander and is even more enraged when the letter arrives from Amastre accusing him of infidelity. Xerxes orders Arsamene to kill Romilda, but Amastre comes forward and reveals her identity. Abashed, the King wishes his brother and Romilda happiness in their marriage and agrees to marry Amastre.

The characters of Handel’s Xerxes are loosely based on Herodotus’s description of the Persian King Xerxes and his campaign against Greece. His admiration for a plane tree, his brother Arsamene the princess Amastre have all been traced to historical facts. He also aspired to build a bridge over the Hellespont, but his engineers failed to construct using the usual materials. In retaliation, the rough sea had to be punished by 300 men. They whipped the water, for Xerxes was determined to maintain a passage over the strait.

The libretto, however, focuses on the fictional love-plotting in Xerxes’ entourage. The king plays a significant role himself as his invasion of Greece should provide him with new lovers to conquer. Helped by intrigue, cross-dressing and mislead letters, the protagonists pursue - and finally achieve - romantic goals rather than glory for the Persian Empire.

In the original programme notes from the 1738 premiere, the historical liberties taken for the libretto were laid bare: “The contexture of this Drama is so very easy, that it wou’ d be troubling the reader to give him a long argument to explain it. Some imbicilities, and the temerity of Xerxes (such as his being deeply enamour’ d with a plane tree, and the building a bridge over the Hellespont to unite Asia to Europe) are the basis of the story; the rest is fiction.”

The opera experiments with new ways of musical dramaturgy. Even though it is an opera seria in tre atti, the ambiguities of the plot invite comic and satirical elements to loosen the usual seria structure. The audience at the premiere did not know how to process this. No heroic story is exposed and developed. Rather, at the centre of the action are the plotters with their agendas and feelings.

The music was different from what the audience was used to as well. Instead of long-lasting da capo arias in which the protagonists reflect on their destiny, there are many short arias and concise recitatives. These push the plot along in a way that felt too fast and hurried at the time.

For all his musical innovations, Handel knew not to interfere with what audiences wanted most - extravagant costumes. Despite their impracticalities, men would have to wear the armour of a roman captain and women would be dressed in hoop skirts with long trains inspired by the fashion of France. All these and more were endured by the singers and enjoyed by the audience when Xerxes received its premiere in 1738 at the Queen’s Theatre in London.

Germany’s Gesine Völlm has designed the costumes at Oper am Rhein. Xerxes’ own opulent costumes change as often as his tactics, which allows his opponents little time to rest. This results in a ‘baroque Muppet Show,’ as the celebrated Norwegian director Stefan Herheim describes his spectacular production.

4° Reaching for the stars

Most of Handel’s main characters are composed for high voices, often castrati. One of the most famous of these was Farinelli, who led an entourage of stars singers. After the singer left London for Madrid, his position was replaced by the castrato Gaetano Majorano, took the stage name ‘Caffarelli’. It was he who first performed the role of Serse. Like all castrati, once he had gained some fame in the opera world, his financial future was secured as well as his status. Society generally ostracised castrati – a lonely destiny awaited everyone who failed to make an impression on stage, and that only came if they survived the dangerous procedure.

Composers stopped writing roles for castrati in the 19th century with female singers largely taking over the heroic characters in the old repertoire. Since the rise of historically-informed performance practice, counter-tenors have been slowly replacing women in these roles. Oper an der Rhein’s production features a mixed cast of both counter-tenors and sopranos, which provides a diversity of timbre to the high vocal ranges required for the opera.

Despite the comic elements in the opera and the crossdressing, the music has all the dignified traits of an opera seria, starting with Serse’s now canonic ‘Ombra mai fu’. In this opening aria, the king admires a plane tree that is providing him with shade, and he sounds no less rejoiceful than if he were singing about a woman he profoundly loved. Unused to the intermingling of genres, this made it all the more difficult for the first audiences to appreciate the satire. But with the passage of time, Handel became regarded as a comic genius for the way that he paired absurd situations with heroic melodies. ‘Ombra mai fu’ is clear, majestic and timeless. It is also an almost exact copy of the opening aria from Giovanni Bonocini’s Xerses, written 45 years earlier.