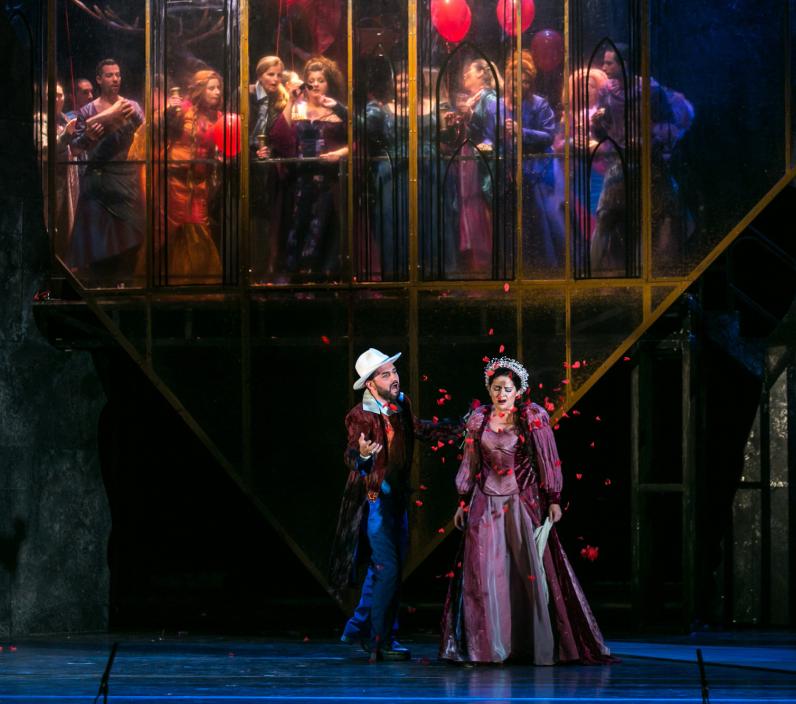 Erkel
This performance is no longer viewable as video-on-demand for rights reasons but other material about the production is still available.

When the loyal Viceroy of Hungary sees the reckless Queen neglect her subjects and dishonour his wife, he decides to take matters into his own hands.

Seize this rare opportunity to watch the most popular of all Hungarian operas in a unique production by Attila Vidnyánszky. The tragic story of Bánk bán has not left the repertoire in Hungary since it was first performed in 1861.

Act II. Viceroy Bánk (Levente Molnár) has sent several reports to Queen Gertrud (Ildikó Komlósi) about Hungary's misfortunes, but they have fallen on deaf ears. Bánk confronts the Queen directly in the throne-room, and she condemns him to death for his insolence.

Act I. The Queen is ruining his country. The prince is seducing his wife. Distraught by the stain on his country and good name, Viceroy Bánk (Levente Molnár) sings 'Mint száműzött... Hazám, hazám' and pledges his life to Hungary.

Attila Vidnyánsky, the director, talks about the struggles of the title character, the functions of the set, and the theme of internal conflict that lies at the heart of the opera.

While King Endre II of Hungary is fighting abroad, Queen Gertrud plays hostess to leading members of the Court. Prince Ottó, the queen’s younger brother, is trying to seduce Melinda while her husband Bánk bán, the king’s deputy, tours the country. Petur bán, the leader of the restive Hungarian noblemen, looks on the festivities with disdain. He tells his companions that he has secretly sent a messenger after Bánk to ask him to come back and see, with his own eyes, the double threat looming over the country and his own wife, Melinda.

Melinda reacts coldly to Ottó's public courtship and is appalled to realise that Queen Gertrud herself is willing to support the liaison. Arriving home, Bánk watches as Ottó kneels before Melinda but he leaves before he can witness his wife's firm rejection of the prince. Melinda provokes an angry response from Gertrud. Believing Bánk to be far away, the malcontents swear to avenge him.

Bánk resolves to approach Gertrud and reveal the country's problems to her. He is discovered by Tiborc, an elderly peasant who once saved Bánk's life in a long-ago battle. Soon, Melinda herself appears, distraught and on the brink of madness having been raped by Ottó. Bánk curses their child, but Melinda's pleading and the memory of her old beauty and purity compel him to forgive her. He then asks Tiborc to accompany his wife and their child to his castle on the bank of the Tisza.

In spite of the late hour, Bánk heads for Gertrud's chambers. The queen demands an explanation for his sudden return, while he calls her to account for not even attempting to remedy the country's wounds. After she threatens him with death, Bánk also holds her responsible for Melinda's lost honour. Gertrud curses Bánk, Melinda and Ottó. The prince enters upon hearing his sister's cries for help, but flees at the sight of Bánk. Gertrud draws a dagger, only to be overpowered by Bánk.

A storm overtakes Tiborc, Melinda and her child on the banks of the Tisza. Melinda’s own tragedy returns to her in a series of deranged hallucinations and she casts herself into the raging river with her little son in her arms.

In the palace, Endre II and his court are gathered around Gertrud's catafalque. A royal officer reports that he has killed Petur, the queen's murderer. Bánk enters and tosses his chain of office, the badge of his authority, onto Gertrud's coffin. He admits to the murder, but will not accept the king's judgement over him. His punishment is delivered not by the king, but by the story told by Tiborc, who has arrived with the bodies of Melinda and their son. Having lost everything Bánk breaks down and ends his own life.

5 things to know about Bánk bán

Ferenc Erkel, the composer of Bánk bán, is regarded as the father of Hungarian grand opera. The librettist for his first three operas was Béni Egressy, an actor, composer and revolutionary fighter. Egressy set Mihály Vörösmarty's patriotic poem ‘Szózat’ to music, which is now considered the second or unofficial national anthem of Hungary. In 1844 Erkel entered a competition to set another patriotic poem, ‘Himnusz’, to music. He won, and the song became an instant success. 145 years later it became Hungary’s official national anthem.

The opera Bánk bán is based on a stage play of the same name by the Hungarian playwright and poet József Katona. He studied law at the University of Pest but spent his student days acting, writing plays and translating German works for the Hungarian stage. At the age of 23 he entered Bánk bán into a literary competition but it was not mentioned at all in the adjudication. Katona rewrote the play and published it privately but when it again failed to be noticed he stopped writing for the stage altogether. He moved back to his hometown of Kecskemét and died at the age of 39, a few years before Bánk bán became a popular success.

Bánk Bár-Kalán was an influential nobleman in the Kingdom of Hungary in the early 13th century. He was the ispán – the equivalent of a count – of at least eight counties as well as Ban of Slavonia. He was also Palatine of Hungary from 1212 and 1213 – the years in which Bánk bán is set – and served a term as Judge Royal a decade later. A ban was a provincial governor who reported directly to the king. The title is similar to that of palatine, viceroy or duke, and was in use in several states in Central and South-eastern Europe between the 7th and 20th centuries. Its etymology is contested but the word has been preserved is such places as the Banovina region of Croatia and the town of Banovići in Bosnia and Herzegovina.

Gertrúd of Merania really was assassinated by a group of Hungarian noblemen that included Bánk Bár-Kalán. While her husband, King Endre II, was away in battle in 1213, Gertrúd assumed the regency. She then gifted many parcels of Hungarian land to her German relatives and elevated their positions in her court. Fearful of losing their influence, Bánk Bár-Kalán, former Judge Royal Töre fia Péter and two Kačić brothers took the queen and her relatives hunting in the Pilis Mountains. There, Töre fia Péter captured Gertrúd and tore her body to pieces.

5° A tale of two versions

Bánk bán opened at the National Hungarian Theatre, Pest, in 1861, with the tenor József Ellinger performing the title role. When the Hungarian Royal Opera House came to produce it in the late 1930s, however, they lacked a tenor suitable for the part. Instead of dropping the opera from their schedule they decided to rework the music so that Bánk could be played by their star singer, the baritone Imre Palló. Throughout the mid-20th century directors also made small changes to the drama and text of this second version. Today, lovers of Bánk bán are divided on which version is best. Attila Vidnyánszky's production uniquely bridges that divide by using text and musical material from both the original and baritone versions.