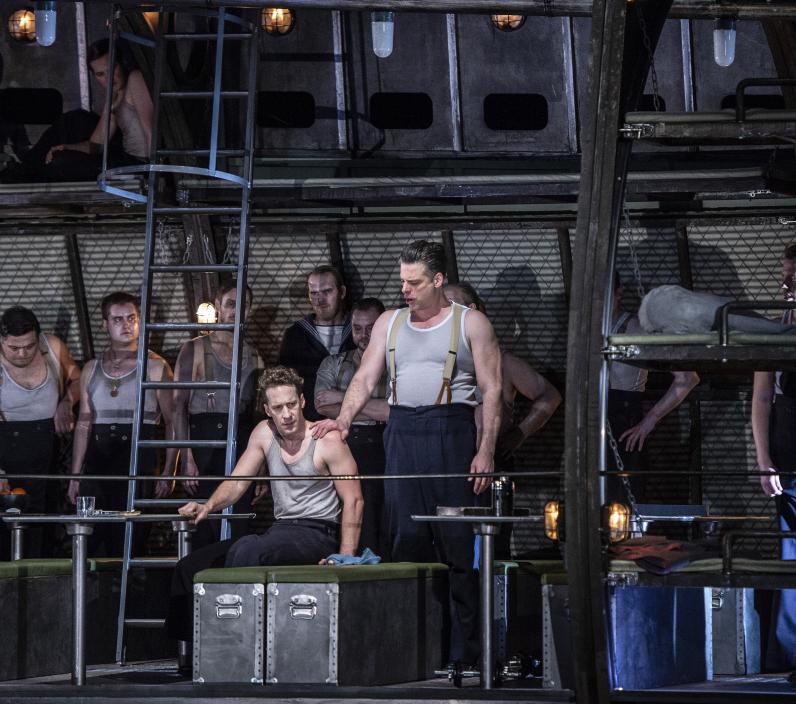 When a happy, industrious and strikingly handsome young man joins the HMS Indomitable, everyone is drawn to him. The new crewman’s only imperfection is that he stammers when stressed, a fact that the hardened Master-at-Arms is all too happy to exploit.

Britten’s maritime masterpiece about repressed passions and the weight of guilt is performed in Norway for the very first time with this new production by Norwegian National Opera. In her first show since becoming the company’s Director of Opera, Annilese Miskimmon sets Billy Budd in the claustrophobic, hard masculine environment of a submarine. Mark Wigglesworth conducts the all-male cast, starring Jacques Imbralio in the title role.

Billy in the Darbies

Act II: Imprisoned in his cell while awaits his execution, Billy Budd (Jacques Imbrailo) reflects on his fate. The text for this poignant monologue comes from Herman Melville’s ballad ‘Billy in the Darbies’, which he wrote before working on his novella Billy Budd, Sailor.

This is our moment

The fog has lifted and an enemy frigate has been sighted. Now it’s all hands on deck for the crew of the HMS Indomitable who, after weeks of waiting, are excited to finally see some action.

Behind the scenes of Billy Budd's staging

'Britten was a genius in deciding to make an opera based on this navel world,' says Annilese Miskimmon, who directs this new production of Billy Budd at the Norwegian National Opera and Ballet. Watch her and the creative cast and crew putting this maritime masterpiece together.

Annilese Miskimmon sets her new production of Billy Budd on a submarine during the Vichy regime in 1940s France. In this video, watch scenery maker Sophie-Marie Wetenskiold, scenography and costumes designer Annemarie Woods, scenery metalworker Stephan Udbjørg and their team put it all together.

Edward Fairfax Vere looks back on his life at sea as the captain of HMS Indomitable. He is haunted by his memories.

The crew of the HMS Indomitable go about their work. A passing merchant ship has provided three new recruits, among them Billy Budd, an open-hearted, good-natured young man. Questioned by John Claggart, the master-at-arms, Billy reveals a stammer. When he shouts farewell to his former ship, The Rights o’ Man, the officers mistakenly fear that he will encourage dissent on board. Claggart, who secretly despises the officers, is instructed to watch Billy closely. He orders his corporal Squeak to use every opportunity to provoke Billy.

A young novice has been brutally flogged. Dansker warns Billy to beware of Claggart. Alone with Captain Vere, the officers express their dislike of the French, whose ideas they hold responsible for recent naval mutinies. They warn that Billy is a potential troublemaker, but Vere disagrees with their assessment of the young man´s character. The ship enters enemy waters.

The crew sing sea shanties below decks. Billy discovers Squeak rummaging through his belongings as Claggart has ordered, and attacks him. Claggart intervenes and, to cover his own involvement, has Squeak arrested. Threatened by Claggart, the novice tries to trick Billy into leading a mutiny with the promise of French gold. The plan fails when Billy gets angry. Dansker repeats his warning to avoid Claggart, but Billy is certain he has nothing to fear from him.

Officers and crew are eager to engage the enemy. Claggart tells Vere there is a dangerous mutineer on board but he is interrupted when a French ship is sighted. Vere orders to give chase and the crew prepare for battle. A shot is fired but misses the target. The mist returns, putting an end to the pursuit.

Claggart reveals to Vere that it is Billy Budd who is planning mutiny. He produces as evidence the French gold he has given the novice to bribe Billy. Vere cannot believe Claggart and sends for Billy to confront his accuser.

Asked to defend himself, Billy gets so upset that his stammer chokes him. He strikes out at Claggart, killing him on the spot. Vere, shaken, summons his officers and a drumhead court is constituted. Billy admits the deed but cannot explain why Claggart should have wrongfully accused him. When the officers turn to Vere for an explanation, the captain refuses to respond. The court pronounces the death sentence.

Early the following morning, Billy contemplates his imminent death. Dansker appears with news that the ship is now indeed close to mutiny, the crew determined to prevent Billy’s execution. Billy tells him to stop them, for he has accepted his fate. He asks God to bless Vere before his death sentence is enacted before the entire crew.

The old Vere remembers Billy’s burial at sea and is haunted by the knowledge that he could have saved him.

5 things to know about Billy Budd

Benjamin Britten’s great breakthrough as a composer came in 1945 with his opera Peter Grimes. He followed this up with two chamber operas, The Rape of Lucretia and Albert Herring, and a children’s opera, The Little Sweep, before making his return to the full opera format with Billy Budd. The work received its premiere at the Royal Opera House, Covent Garden, in 1951, where it was conducted by Britten himself. Britten’s life partner, the tenor Peter Pears, sung the role of Captain Vere.

Certain themes recur throughout Britten’s works: conflicts between individuals and society; the horrors of war; destructive conventions; and repressed desire. Billy Budd confronts all these issues and looks at how they affect our concept of manliness, especially in relation to homosexuality. The opera was written at a time when homosexuality was still illegal under British law, and theatrical and operatic performances continued to be censored. What the opera says about these themes is therefore given in coded form. But this opera is also about being a human being in a world where one is ultimately alone, where we yearn to belong, to be loved, forgiven and accepted.

3° The most beautiful story

The text is based on a novel by the American literary giant Herman Melville, perhaps best known as the author of another maritime adventure, Moby Dick. One of his last works, Billy Budd, Sailor was discovered among Melville’s papers when he died in 1891. Thomas Mann, another giant of literature, called the novella ‘the most beautiful story in the world’. The Italian composer Giorgio Ghedini also created an operatic version of Billy Budd, Sailor, which premiered two years before Britten’s. Several other adaptations of the novella have been made, the most critically acclaimed of which include Louis O. Coxe and Robert Chapman's stage play, which opened on Broadway in 1951, and Peter Ustinov’s 1962 film, which starred the young Terence Stamp as Billy Budd and the director himself as Captain Vere.

‘The first time I walked into this amazing opera house and looked straight through the foyer and out on the sea, it struck me that it is in itself a ship,’ says Annilese Miskimmon, who became Director of Opera for Den Norske Opera and Ballet in 2017. For her, Billy Budd is the opera that, more than any other, really brings the sea onto the stage and into the music. And when she realised that it had never before been performed in Norway, it was obvious for her that they had to do it. ‘It is a great privilege,’ says Annilese Miskimmon, ‘both as Opera Director of this house and as director of this production to be able to introduce Billy Budd to Norway – especially with such a great conductor as Mark Wigglesworth and the fabulous opera orchestra we have here.’

Annilese Miskimmon sets her new production of Billy Budd on a submarine during the Vichy regime in 1940s France. Here we meet a close and claustrophobic environment, controlled by sailors’ discipline and the meaningless necessity of war. ‘I wanted to build an entire submarine to get the real feeling of claustrophobia,’ says set and costume designer Annemarie Woods. ‘We just had to pick a section, unfortunately, but I think you get a picture that it extends beyond the sides.’ The 14-metre long, 6.5-metre high aluminium structure is Norweign National Opera's big investment for the season. ‘It will be a huge, huge, huge construction’ says scenery metalworker Stephan Udbjørg. ‘It will be one of the nicest, greatest and toughest things that have ever been on stage in the Opera House.’