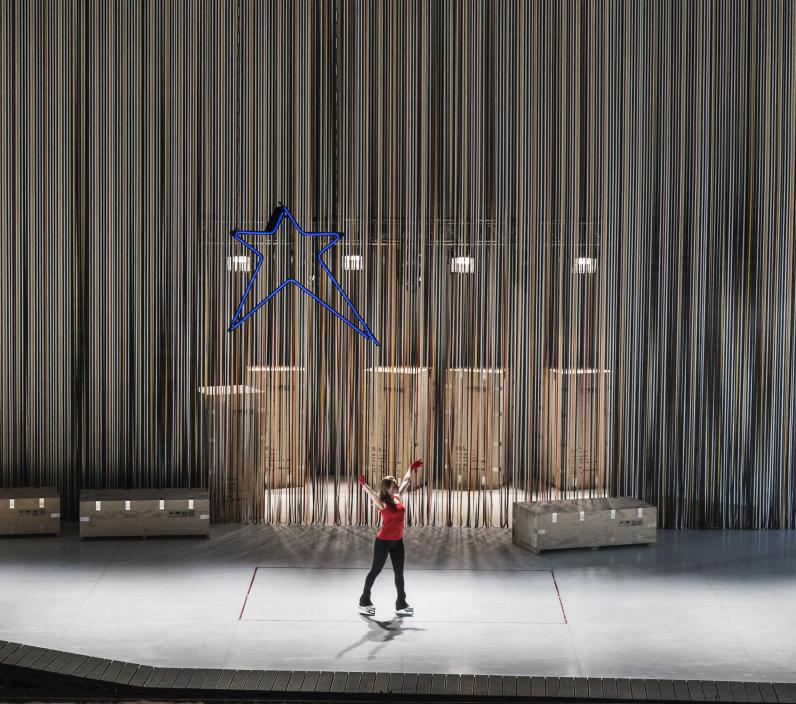 An opera by David Sawer and Rory Mullarkey, based on a novel by Roberto Bolaño. A local civil servant’s obsession with a beautiful figure skater drives him to embezzle funds to build her a secret ice rink. When an unlikely group of characters discovers them, tension mounts until a murder on the ice unravels everything.

Garsington Opera‘s commission The Skating Rink, written by leading British composer David Sawer with award-winning playwright Rory Mullarkey, premiered in July 2018. Based on Chilean author Roberto Bolaño’s novel it tells the thrilling tale of jealousy, political corruption and the lengths we go to for the ones we love.

Introduction to The Skating Rink

The Skating Rink is a gripping new opera, written by leading British composer David Sawer with award-winning playwright Rory Mullarkey, and based on the novel by Chilean author Roberto Bolaño. The world premiere took place at Garsington Opera in July 2018.

Behind the scenes of The Skating Rink

Cameron Sinclair (Garsington Opera Percussionist) gives us a tour of the various instruments used in The Skating Rink.

Place: A small seaside town on the Costa Brava, Spain
Time: Towards the end of the summer, in the early 1990s

Gaspar, a young Mexican poet, works as a night watchman at the Stella Maris campsite. His boss, Remo Moran, a successful Chilean businessman, orders him to evict two female vagrants, Caridad and Carmen, who have been staying there for free.

Gaspar is reluctant, particularly as he has grown attached to Caridad, but he obeys Remo in order to keep his job. The pair, especially Carmen, a former opera singer, initially resist their eviction but then decide to leave.

As time passes Gaspar continues to think about Caridad. He goes to look for her and finds Carmen, whom he follows through a dreamlike fiesta until he spots her arguing with a presumed lover - Rookie. He then notices Caridad in the crowd, and follows her to the Palacio Benvingut, a dilapidated mansion on the outskirts of town.

Inside the mansion, he discovers a secret ice rink, where a beautiful young figure skater, Nuria, is skating, watched by an older man, Enric. Gaspar sees Caridad in the shadows, holding a knife.

A jump back in time, to follow events from Remo's point of view.

Remo is tasked by Enric, the town's head of social services, with removing all vagrants from his campsite. He ignores the order and devotes his energy instead to Nuria, the skater, who has recently become his girlfriend.

The initial passion of Remo and Nuria's relationship has been marred by the thwarting of her career prospects: her funding has been cut and she has nowhere to train.

The couple takes a romantic swim but run into Enric on the beach. Remo sees that Enric is jealous of his relationship with Nuria and decides to fulfil his order about the vagrants in order to dispel Enric's anger. Carmen and Caridad are evicted from the campsite.

Nuria begins to spend less and less time with Remo. Unable to find her, he turns to drink. In a seafront bar one evening, he meets Carmen and Rookie. Carmen entertains the patrons with her singing and hints that she has information with which she might blackmail Enric.

Gaspar arrives at Remo's room and tells him he's found Nuria, at the Palacio Benvingut. Remo rushes there, discovers the skating rink, and makes a gruesome discovery: the body of Carmen, stabbed to death on the ice.

A jump back to the beginning again, to see things from Enric's perspective.

With the local elections looming, Pilar, the town's socialist mayor, tasks Enric with ridding the area of vagrants.

Enric is obsessed with Nuria. After finding out about the loss of her funding, he has embezzled a large amount of public money and built her a secret ice rink in the Palacio Benvingut. He hopes that this grand gesture will make her fall in love with him. He goes with her to the ice rink every afternoon and watches her train. He dreams that he himself can figure skate.

When Enric runs into Remo and Nuria together on the beach, his hopes of romance are dashed. Carmen and Caridad are evicted from the campsite.

Nuria falls over while training. She senses Enric's jealousy and assures him her relationship with Remo is just about sex. Enric goes out onto the ice and attempts to dance for her but is startled by a noise in the shadows.

Carmen visits Enric in his office. She and Caridad stumbled upon the secret ice rink while searching for a new place to stay and Carmen now hopes to blackmail Enric in return for her silence. Enric gives Carmen some money and she goes, warning Enric she wants more.

At a pre-election disco Pilar welcomes the guests. Nuria accidentally reveals the existence of the ice rink to Pilar. Enric attempts to maintain his composure by dancing with Nuria but is obliged to admit that he has embezzled funds when Pilar confronts him. Remo arrives with the police, who arrest Enric for Carmen's murder. Enric protests his innocence as he is escorted away.

Nuria visits Enric in prison. He has been convicted of embezzlement and sentenced to two years. Nuria promises to wait for him.

Remo meets Rookie on the beach. The identity of the murderer is revealed.

5 Things to know about The Skating Rink

Since his untimely death at 50 in 2003, the works of Chilean author Roberto Bolaño have met a cult following with the New York Times calling him the ‘most significant Latin American literary voice of his generation’.

Although Bolaño indeed considered himself a Latin American writer and primarily as a poet, he spent more than half of his life in Spain. After moving to Mexico at age 15, Bolaño emigrated to Spain in 1977, where he had to work odd jobs to keep afloat. He frequently drew on his eclectic life experience in his writing. In his first novel The Skating Rink, his characters work as a campsite guard or as jewellery salesperson, much as he has done.

While in 1993 The Skating Rink won Bolaño the City of Alcalá de Henares Prize for Fiction heralding his future success, that same year he was diagnosed with a degenerative liver disease that same year. Aware that he was now living on borrowed time, Bolaño went on to produce a remarkable oeuvre reflecting the relationship between fiction and violence including The Savage Detectives and 2666.

2° From the page to the stage

Seeing that Bolaño himself appreciated variations and derived forms, brushing aside the notion of a definitive work of art, he would surely have relished in the adaptation of his novel into an opera. Commissioned by Garsington Opera, The Skating Rink is a collaborative work between British composer David Sawer and Canadian playwright Rory Mullarkey.

Chris Andrews, the novel’s English translator perceives a combination of loyalty and freedom to Mullarkey’s script which highlights an apocalyptic strain. Mirroring the novel’s multiple narrators revisiting the buildup to a central event, Mullarkey and Sawer offer one act to each.

According to The Telegraph’s opera critic Rupert Christiansen, the result is ‘an intriguing experiment in neo-noir that pays off handsomely.’ It has, says Richard Morrison of The Times ‘all the twists and pace of a TV thriller, matched with music equally direct and striking.’

While it may not have jumped out to David Sawer right away to adapt The Skating Rink into an opera, translator Chris Andrews acknowledges that the novel is ‘metaphorically operatic in a number of ways, juxtaposing voices as well as points of view.’ The novel comprises theatrical episodes of characters watching and being watched.

One essential such scene is when Nuria, the figure skater, draws the brash civil servant Enric into the rink, spied on by Caridad, who is armed with a knife. She, in turn, is noticed by the night watchman Gaspar hiding among the packing cases. By bringing the story to the stage, another voyeuristic layer is added in the form of the audience.

4° Getting her skates on

The character of Nuria links the narrators’ storylines. She is the object of desire of two of them and yet her own aspirations remain rather vague. In Stewart Laing’s staging, she is portrayed twice, by the singer Lauren Zolezzi and by the skater Alice Poggio.

The 22-year old figure skater Poggio reflects on her first time performing on stage. ‘Nuria is struggling and trying to pull through and do her best. Having suffered my own injuries and setbacks I can definitely relate and hopefully, that will be perceived by the audience.’

Putting on a never-before-seen work for the first time is an exhilarating and daunting undertaking at once. Lauren Zolezzi, who sings the part of Nuria, reflects ‘when you're creating a new piece, there is a level of tension, that perhaps doesn't exist in other works because you already know whether the public likes it or not.’

Luckily, the audience did take to the opera, strengthening Zolezzi’s commitment to open new horizons as to what the artform can be today. In performing a new commission, she continues ‘you don't have anyone's footsteps in which you can follow, so when you get that score for the first time, you're filled with the excitement but also like trepidation because you have to make this amazing.’ 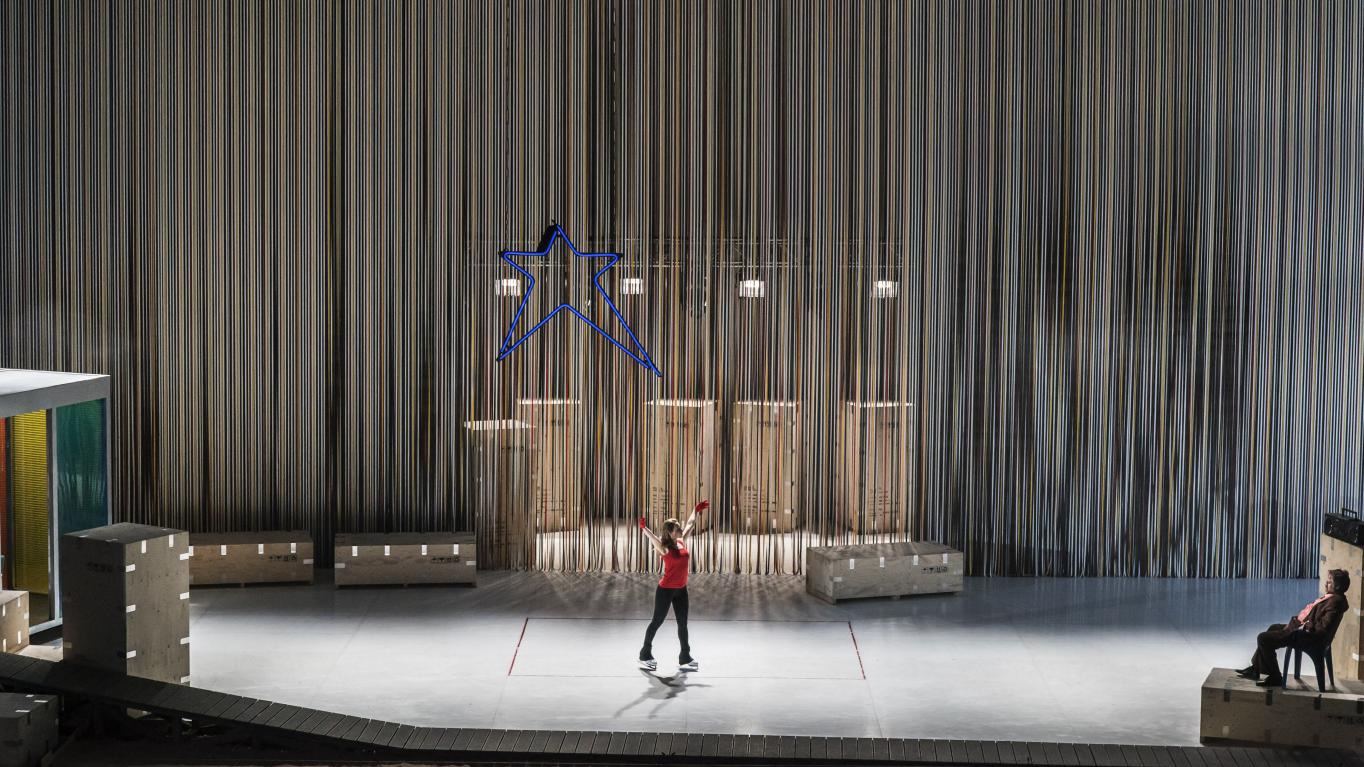