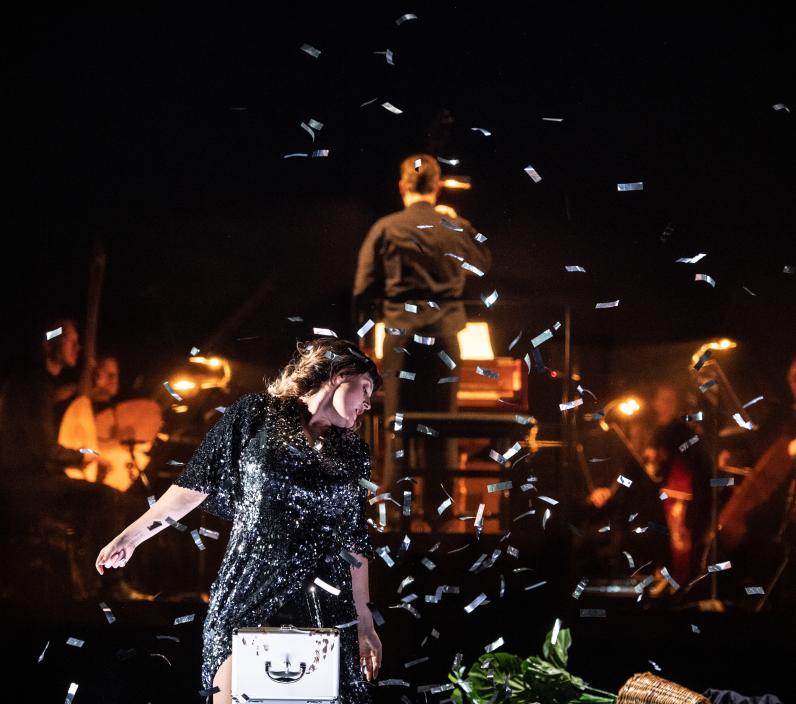 Four lives at a crossroads. Four people in the darkness of the night, when only the hope for an answer lights up the room.

In Handel's oratorio Il trionfo del tempo e del disinganno (1707), the desire to live is at odds with the realisation of one's own mortality. In his early masterpiece, the composer was able to open up clear emotional spaces to the simultaneity of the incompatible. What does it mean to be alive - and what does it mean to demand to be fulfilled with this life? And who am I when the mirror only gazes at me in silence? In Handel's music the questions begin to float.

In this extract, ‘Lascia la spina’, she sings about admiring the beauty of roses and not destroying that image with the thought of thorns. Her aria is echoed by La Bellezza (Sarah Brady) and Il Disinganno (Nicholas Tamagna). Like everything that became popular, Handel used this aria again and again without batting an eyelid; many people will know it as ‘Lascia ch’io pianga’ from Rinaldo.

'Tempo is a man but he feels that he's stuck in the wrong body, he wants to be a woman,' explains tenor Sunnyboy Dladla about his character in Staatsoper Hannover's production of Trionfo.

'Bellezza feels stuck. She wants to see what else there is beyond being a housewife, she wants to push the boundaries,' explains soprano Sarah Brady about her character in Staatsoper Hannover's production of Trionfo.

Behind the scenes of Trionfo

What is truth and what might a life in harmony with it look like? This question is at the heart of George Friedrich Handel's early oratorio Il Trionfo del Tempo e del Disinganno, which was written in Rome in 1707. Four allegories - Bellezza, beauty, Piacere, pleasure, Tempo, time, and Disinganno, enlightenment or disillusionment - are in conflict; in the end, beauty has a glimpse of what is true and looks hopefully into the future. So much for the religious libretto. In Handel's gripping music, which shines with transparent clarity, the pure moral didacticism of the text also becomes a concrete struggle over some existential questions.

The staging also takes up this urgency, as we experience the four allegories transformed into people of flesh and blood. Their names here are B., P., T. and D. and are in the middle of life on the threshold of an uncertain tomorrow. The housewife and mother B. asks herself: Who am I actually beyond the one who sacrifices everything for the family? The life-hungry P., afflicted with a deadly illness, is confronted with her own mortality. T. feels like she was born in the wrong body. And D., the writer, asks himself how he can figure out a world that is more and more incomprehensible. Trionfo. Four Last Nights is a piece about the desperate desire to be alive. It radiates melancholy - and yet it is not without hope for the four characters, because in the utopian space of music theatre their longing for encounters is heard.

Straight away, Bellezza's first aria ‘Fido specchio’, in which she sings about the ‘faithful mirror’ and becomes aware of her mortality, shows us that her seemingly carefree, frivolously hedonistic nature conceals an insecurity. The aria is in A minor, which is very unusual for a young female character right at the beginning of such an oratorio. The French composer Marc-Antoine Charpentier, whom I love very much and who was Handel's contemporary, had ascribed the attributes ‘tender and plaintive’ to this key only a few years earlier. One could also say: sensitive. Thus, from the very beginning, existential questions about her contradictory feelings manifest themselves in Bellezza's inner being. From here it is a long journey for her from the A minor of the beginning to the E major of her final aria, in which she sings about the eternal beings of heaven. In between lies the lengthy attempt to find out what kind of person she can be or whether she could become a better person at all. So this development does not correspond to the call to obediently pray so that everything will be good, but rather to the spirit of the burgeoning Enlightenment, which also meant an emancipation of thought. In his music, Handel, who was not very pious, hides a subversive power that leads to God - but on a long diversion via the person.

Piacere has clearly and ruthlessly dedicated herself to the forbidden pleasure whose name she bears. Her music, in its extremes, with its many high leaps and bold chromatic twists, is downright scandalous for the period in which it was written. Hopelessly addicted to her selfishness, she does not go through a development like Bellezza, but lives in the moment without consideration of consequences and actively refuses to face the truth that the other characters try to face. Particularly towards Bellezza, who is torn between trying to find the right path, Piacere behaves like the little sibling, always trying to disturb and undermine the more serious intentions of her big sister. But Piacere also has moments when we sense her insecurity, when we hear her wondering if she is really on the right path. Then it is as if deep inside she knows the answer. In the touching ‘Lascia la spina’, she sings about admiring the beauty of roses and not destroying that image with the thought of thorns. Like everything that became popular, Handel used this aria again and again without batting an eyelid; most people will know it as ‘Lascia ch'io pianga’ from Rinaldo. In Trionfo, however, he added oboes, and I would say that they are the thorns that Piacere feels. And the thorns are the contradiction in which the figure lives: she is a fallen angel, she knows the truth and knows that she is running to her doom, but she cannot abandon the path she has chosen. In these short, thoughtful snapshots, which unfold not in words but in music, we feel how vulnerable Piacere is in her whole selfish nature.

Disinganno: The desire to fly

The figure of Disinganno is caught between two opposites and is in constant danger of being crushed between them. The baroque style of the ‘chiaroscuro’, the direct contrast of light and dark next to each other, as we know it for example from Caravaggio's paintings, is inscribed in this figure. For the truth and enlightenment that ‘Dis-inganno’ (dis-illusionment) literally carries within itself is always accompanied by the recognition of one's own vulnerability and impermanence. Thus the figure moves between the extremes of cynicism and hope against better knowledge. So every negative feeling also includes the positive other side. His aria ‘Crede l'uom’, in which he sings that time spreads its wings in secret, has Handel accompanied by recorders, which in baroque music are a very clear symbol of death. In the Luther-influenced world from which Handel originated, death is not only an end but also a beginning. Disinganno's music is influenced by this: In addition to all the gloom and thoughtfulness that characterises it, it is at once beautiful and hopeful. Disinganno is half in the shadows, his warnings weigh heavily, but his music is interwoven with the idea of flying.

Tempo's conflict is in no way inferior to Bellezza's inner struggle. The first aria of the figure ‘Urne voi’ (You Graves) schematically follows a strict baroque form and yet is searching and wavering in expression like an accompagnato-recitative. The attempt at clarification, which recitatives often negotiate, is thus so dramatic that it must be amplified by orchestral instruments. This is also expressed in the text: Tempo's depictions of death, the bones that are the only remnants of beauty that survive the ravages of time, are bare and cold. Time shrinks from its own deeds as the graves open - a fantastic picture! When Elisabeth Stöppler told me about the idea of depicting in Tempo a figure who has a completely existential crisis, it immediately made sense to me. Because the trauma is already inscribed in this music. There are people who live their lives without ever asking questions and then reach a point where they question their existence for the first time and find themselves in a severe crisis. I have sincere sympathy with speed. Even his quiet duet with Disinganno "Il bel pianto" ("The beautiful lament") conveys this driven mood: the dawn is beautiful and promises a new beginning, but this one will also be terribly painful, full of biting dissonance. For me, this includes the frustration and suffering of the character. Life can be damned cruel.