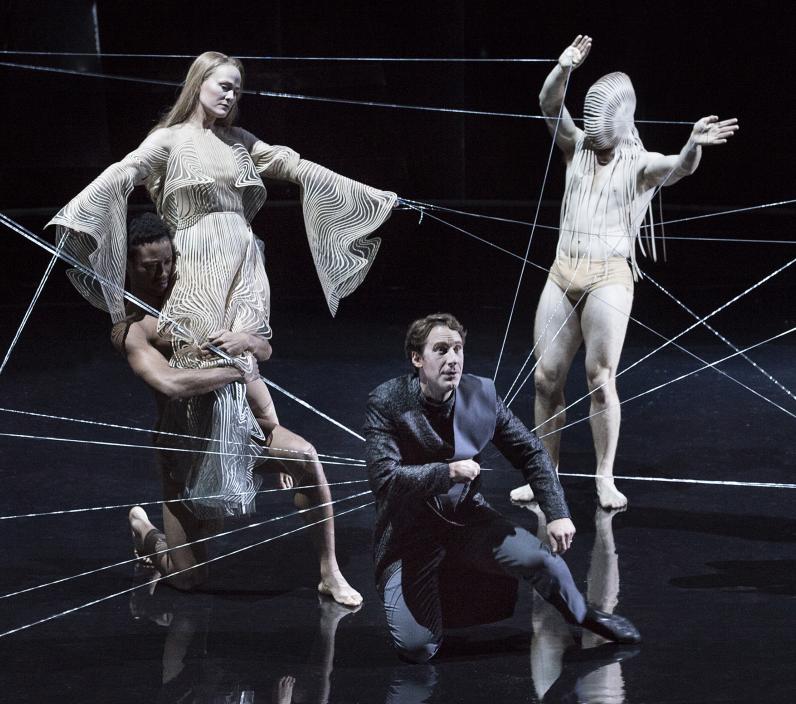 Diverse and dramatic, opera costumes are the first thing to appear in the spotlight, even before the performer has sung a note. And behind every costume dozens of hands, and many more fingers, have painstakingly crafted these sublime creations in the shadows.

What is the purpose of an opera costume? The costume allows the performer to be visible in all the particularities of his or her character, even from the back of the auditorium. Certain elements of the costume can be deliberately exaggerated or simplified: collars, trains, ornamentation, hairstyles and make-up. The costume is an integral part of the production. Through its shape, colour and line, the costume is a set in movement, like an open window on the director's dramatic intentions. See where OperaVision's costumes workshop takes you.

In Dutch National Opera's production of Der Zwerg by Alexander Zemlinsky, the arrival of a strange bird casts pearls before swine. Take a peek at the gorgeous, beastly costumes and listen to director Nanouk Leopold and conductor Lorenzo Viotti share their thoughts.

Behind the scenes of Rigoletto

Rigoletto is one of the most famous operas in the repertoire. It is also the second most performed title at Gran Teatre del Liceu with 375 performances. Maestro Jaume Tribó tells us about the great performers of Verdi's masterpiece which have graced the stage of the Liceu. Conductor Daniele Callegari discusses ‘La donna è mobile’ - the hit song of an era - with Saimir Pirgu, alias the Duke of Mantua, who will perform it on the stage of the Liceu.

Monique Wagemakers' exuberant production from the Gran Teatre del Liceu Barcelona, with its delightful Venetian red costumes, focusses on the themes of ill-treatment, the quest for identity, and the abuse of power over the defenceless, as shown by the Duke's domination of Rigoletto and Rigoletto's domination of his daughter. Precisely the contradictions and conflicts on which the whole extraordinary score rests.

Behind the scenes of Komische Oper Berlin's Cendrillon

Join us on a visit to the wonderland of Berlin Opera's stage service and discover the talented craftsmen and women who are manufacturing the icy sets and opulent costumes for Komische Oper Berlin's production of Cendrillon.

'I think the audience can have fun looking through right to the back of stage seeing if they can find their favorite book title' explains Nicky Shaws, set & costume designer of La Cenerentola at Irish National Opera.

Behind the scenes of the costumes of Werther

A lot of thought goes into making the costumes for opera, not to mention material. In this video, Cathrine Ahlsen, Head of Costumes at Bergen National Opera, gives us a behind-the-scenes look at Charlotte's three dresses and Werther's suit as her team prepare for a new production of Massenet's romantic tragedy.

The making of a Don Giovanni costume (I)

Behind the scenes of La Gioconda

What's the creepiest thing you've ever seen in an opera? Watch the team at La Monnaie / De Munt prepare a giant clown mask alongside other props and costumes for their new production of La Gioconda.