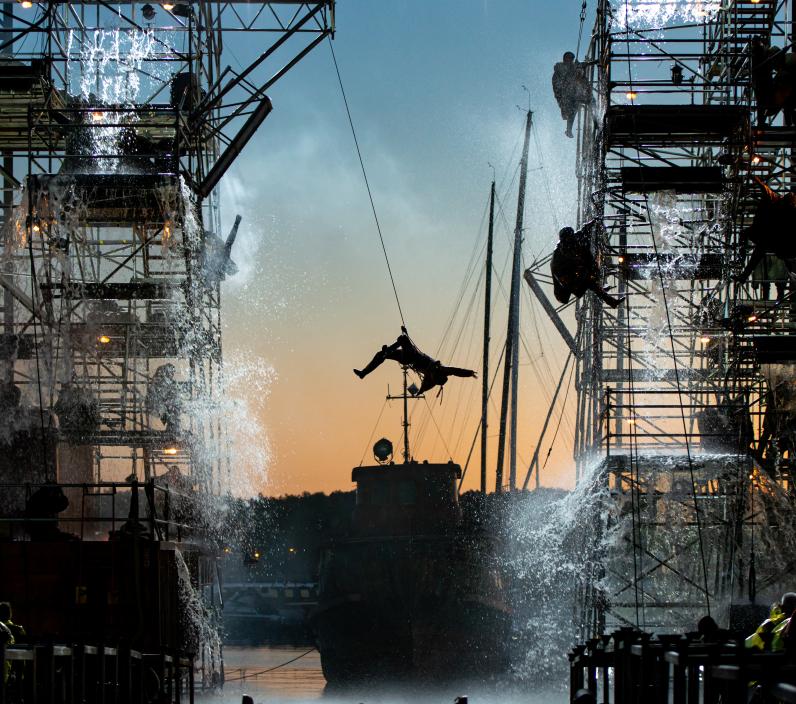 Richard Wagner, despite the controversies surrounding his life and political views, bestrides German opera like a colossus. The canon of his ten mature operas, from The Flying Dutchman to Parsifal, revolutionised opera. His declared purpose of creating a Gesamtkunstwerk, or total work of art, claimed for opera a preeminent position in musical and theatrical life. It adopted a moral purpose. It was no longer entertainment, but a lever to change society. That legacy endures today, 130 years after Wagner’s death.

Wagner cast a long shadow over the work of his successors, not only German composers such as Richard Strauss, nor confined to music, but across the wider world of the arts and politics.

Tristan (Bryan Register) and Isolde (Ann Petersen) celebrate their love: they curse the day and bless the night, the kingdom of true love. There, as an omen of death, all boundaries between the lovers are abolished and the perfect union can be accomplished.

Live on the opening night, Nationaltheater Mannheim share their new production of Wagner’s majestic tale of a captain cursed to sail the seas forever.

In this extract from Act III of The Flying Dutchman, sailors celebrate their safe return to land. They call out to the Dutchman’s ship, inviting the crew to join them, but the ship remains dark and silent. Daland’s sailors deride the mysterious crew and their captain.

After 160 years and countless adaptations, The Flying Dutchman finally returned to the shores of the stormy sea in which the idea for the opera first occurred to Wagner. In August 2020, the Klaipėda State Music Theatre staged the very first production of the opera in Lithuania. The project could not have been more ambitious and has been hailed as one of the country’s most celebrated cultural events of the year.

For Good Friday, the premiere of the new Parsifal live from Budapest staged by Almási-Tóth’s and conducted by Balázs Kocsár at the newly restored Hungarian State Opera, the magnificent Ybl Palace.

Act 1 Hunding’s Hut. Ordering Sieglinde (Sarah Marie Kramer) to prepare food, Hunding (Brindley Sherratt) questions a visitor, who he has just discovered to be Siegmund (Peter Wedd) a sworn enemy. Hunding will respect the laws of hospitality, but in the morning, his guest, who is his foe, must be prepared to defend himself in the working out of their blood feud.

Wagner and his Ring

Wagner’s Ring of the Nibelung remains the most ambitious and monumental achievement in the history of opera. The composer took 25 years to bring it to life, and designed a purpose-built theatre in the Franconian town of Bayreuth in order to realise it.

Wagner's famous aria 'Winterstürme wichen dem Wonnemond' from the opera Die Walküre depicts the meeting between Brother Spring and Sister Love. In Longborough Festival Opera's semi-staged production under the baton of Anthony Negus, Siegmund (Peter Wedd) sings of the young couple's joy as they unite. The aria is a unique phenomenon in Wagner's later work and broke two taboos at once: the incest of sibling love and Sieglinde's adultery.

Seven years since he last set foot on land, The Dutchman (Egils Siliņš) is once again given a brief respite from his eternal wanderings. In this introspective aria he recalls the origins of his curse and longs for the Day of Judgement, having lost all hope for redemption. The intensity of the piece anticipates other bass-baritone monologues that Wagner would write later in his career, including those of Hans Sachs in Die Meistersinger von Nürnberg and Wotan in Der Ring des Nibelungen.