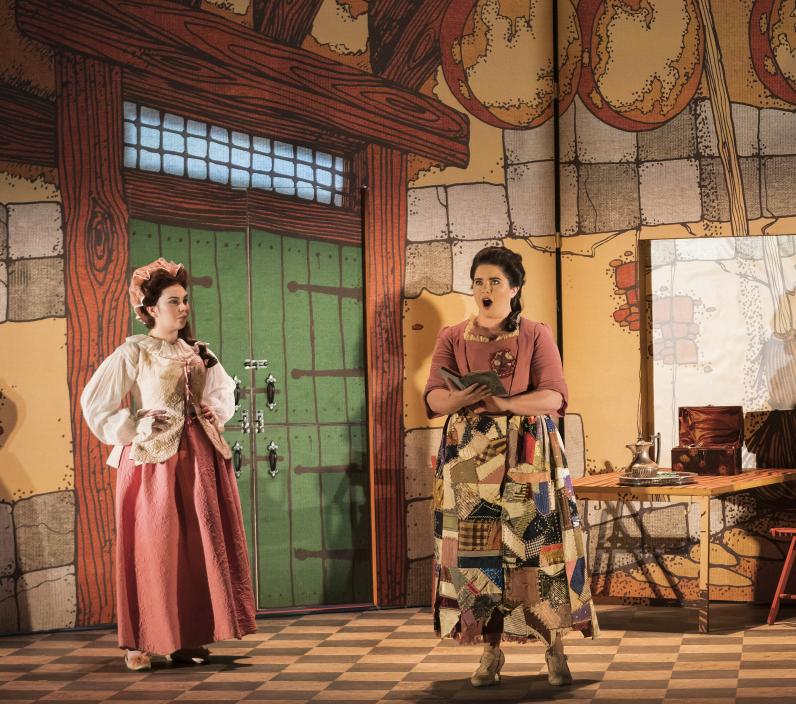 Mezzo-soprano, or ‘half-soprano’ is the female voice that stands between the soprano and the contralto.

The mezzo voice is very similar in extension to that of the soprano but has a darker timbre. In fact, mezzos often sing just as high as their soprano counterparts. In addition, operatic mezzos are also divided into the basic coloratura, lyric, and dramatic groups. What sets mezzos apart are their strong middle voices, their smouldering lower registers. If a mezzo and a soprano were to sing the exact same pitch, the mezzo’s note would most likely sound a little bit fuller, darker, or heavier (imagine a clarinet playing the same note as a flute). Mezzos are usually given secondary roles in the opera with a few exceptions (Bizet’s Carmen is a mezzo).

Agrippina (Anna Bonitatibus) wants Nerone, her son from a previous marriage, to accede to the throne now that Claudio, her husband, has apparently drowned at sea. While a political storm brews in Rome, she remains calm, confident that her deceitful plan will work. Conducted by Robert Howarth and directed by Walter Sutcliffe.

Juditha (Gaëlle Arquez) has been invited to dine with the general Holofernes. In this aria, she reassures her handmaid, Abra (Polly Leech) that everything will be fine so long as she trusts her and stays by her side.

'Belle nuit, ô nuit d'amour', known as a barcarolle is a duet for soprano and mezzo-soprano which opens the third act of Les Contes d’Hoffmann, Jacques Offenbach’s last opera. It is one of opera’s most famous medodies, sung by the Veneitian courtesan Giulietta (Christine Rice) and Hoffmann’s Muse, who has taken on the appearance of Hoffmann’s best friend, Nicklausse (Irene Roberts).

Act II. Cenerentola (Tara Erraught) has married Prince Ramiro after he agreed to forgive her family for their failings and allow goodness to be triumphant. She embraces her step-father and step-sisters, who are eventually won over by her magnanimity. All comment that although she is worthy of the throne, Cenerentola has risen above it. In her goodness and kindness, all find redemption. Conducted by Fergus Sheil and directed by Orpha Phelan.

Act I. Imagining his wife Guinia all alone, Cecilio (Anna Bonitatibus) imagines the moment he sees her again. He wonders how much joy he will feel if now, when he is only thinking about her, he already feels exhilarated. Directed by Tobias Kratzer and conducted by Antonello Manacorda.

In this extract, ‘Lascia la spina’, she sings about admiring the beauty of roses and not destroying that image with the thought of thorns. Her aria is echoed by La Bellezza (Sarah Brady) and Il Disinganno (Nicholas Tamagna). Like everything that became popular, Handel used this aria again and again without batting an eyelid; many people will know it as ‘Lascia ch’io pianga’ from Rinaldo.

The Presentation of the Rose

In one of Strauss’s most iconic theatrical moments, here in Garsington Opera’s 2021 production of Der Rosenkavalier, Madison Leonard and Hanna Hipp sing ‘The Presentation of the Rose’ with Philharmonia Orchestra. From Act II,  Octavian and Sophie declare their love for each other.

Sesto (Adrian Angelico) has led a failed uprising against his friend, the emperor Tito (Bror Magnus Tødenes), but cannot reveal that Vitellia, whom he loves, is behind the plot. Tito reluctantly sentences Sesto to death. Before he is taken away, Sesto sings this aria for Tito, reminding him of their former love for each other and expressing his remorse and despair.