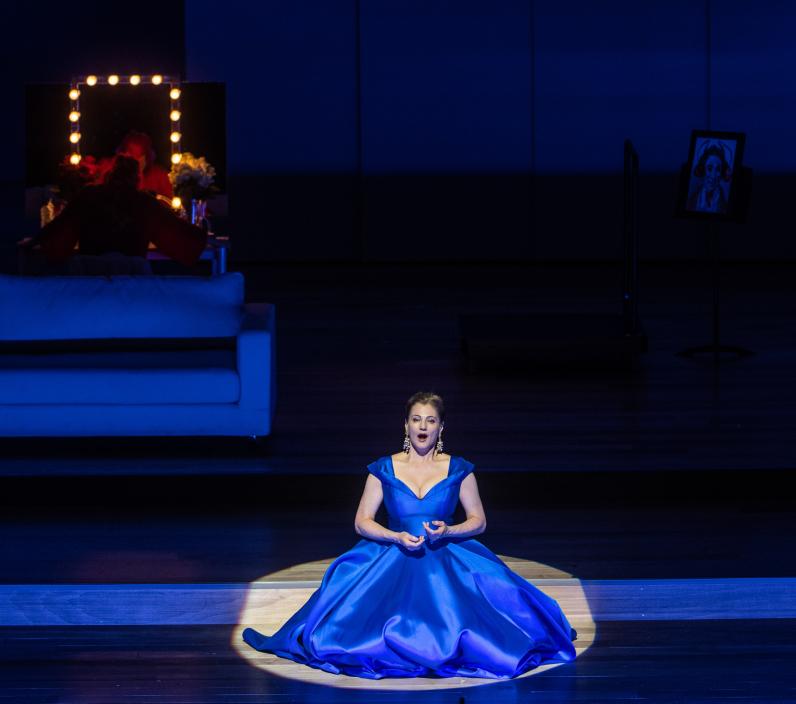 Soprano is the highest operatic voice and the most common in the female range.

This voice is characterised by impressive high notes (hence the name, which comes from the Italian “sopra” or “above”) and a timbre that usually sounds brighter than the other voice types. Sopranos are also capable of immense depth and richness of tone. In opera, sopranos are divided into three basic groups: coloratura, lyric, and dramatic, with coloratura being the lightest and most flexible sound, and dramatic being the darkest and most powerful. ‘Lyric’ lies more or less in the middle. Sopranos, who often sing key melodies, are often the protagonists of the opera.

Marina Rebeka sings the soprano aria ‘Un bel dì, vedremo’ – one of the most famous pieces in the soprano repertoire – from Giacomo Puccini's opera Madama Butterfly.

Cio-Cio San (Marina Rebeka) gives up everything to marry a lieutenant in the US Navy. But when he suddenly leaves the country, she is determined to wait patiently until he sails back into harbour. In this scene, she imagines his return.

Countess Rosina (Dorothea Röschmann) suspects her husband of being unfaithful. Left alone, she ponders the loss of her happiness and wishes that her marriage was still as full of joy as it once was. Conducted by Antonio Pappano and directed by David McVicar.

Love is a rebellious bird... Carmen sings about love and how it cannot be tamed, playing with the hearts of the soldiers on the square.

The illicit love between Pelléas (Dominik Köninger) and his sister-in-law Mélisande (Nadja Mchantaf) never materialises in Debussy’s opera, and the viewer - as well as Golaud, the rightful husband - is left wondering if their passion is ever consommated. In one of the most suspenseful scenes of Pelléas and Mélisande, as Mélisande's hair inundates him from a window above, Pélleas holds it and wraps it around his neck.

Who are you, my guardian angel?

Act I. Tatyana’s (Asmik Grigorian) fate is sealed. She is in love, she confesses to her nurse Filippevna, and writes a love letter to Onegin overnight. Directed by Barrie Kosky and conducted by Henrik Nánási.

In La Voix humaine, a woman (Karita Mattila) calls her ex-lover, unable to let go of him. She flatters, despairs and blackmails in the hope that he will not hang up the phone.

Act II. Marietta (Sara Jakubiak) leads her troupe in a toast before asking Fritz (Günter Papendell) to sing a song. He chooses Pierrot’s Tanzlied, which tells the tale of a clown dancing in the moonlight with his beloved – a simple happiness now lost to him forever.

Act II. Wherever she goes, Musetta (Vera-Lotte Böcker) is admired for her beauty - and she knows it. At Café Momus, she’s being admired by none other than Marcello (Günter Papendell), her occasional boyfriend. She teases him, enjoying the sexual tension between them, while he tries his best to ignore her. Mimì (Nadja Mchantaf) and Rodolfo (Gerard Schneider) enjoy the spectacle while the councillor Alcindoro (Christoph Späth) can do nothing to stop his date going off the rails.

Extract
The Tales of Hoffmann
•

The mechanical doll Olympia (Nicole Chevalier) sings "Les oiseaux dans la charmille", one of the most difficult coloratura arias ever composed for soprano. As the aria’s nickname "Doll's Song" suggests, Olympia's mechanical gear has to be wound up repeatedly so that she can continue singing.

The Polish soprano Joanna Zawartko sings the Countess’s aria from Act III of Hrabina (The Countess) by Stanisław Moniuszko. At her grandfather’s manor, the Countess is deeply disappointed that the young nobleman Kazimierz wants to marry someone else. Vain and proud, she does not want to show everyone her true feelings and decides quickly to leave. Conducted by Tadeusz Kozłowski.

Prince Sternenhoch is asleep, his head resting on a table. In his dreams, he hears the ghost of Helga singing to him. Conducted by Petr Kofroň and directed by Michal Dočekal.

Act II. Jenůfa (Pavla Vykopalová) wakes up in an empty house, her baby and stepmother nowhere to be seen. Failing to find them, she worries for her baby's safety and prays to the Virgin Mary to look over him. Conducted by Marko Ivanović and directed by Martin Glaser.